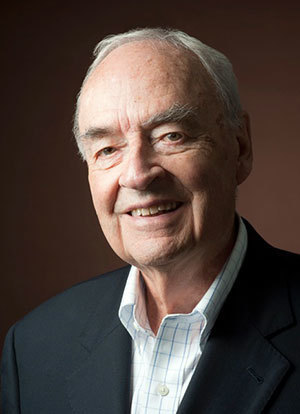 Harris Wofford, senior adviser to the Franklin Project of the Aspen Institute, will deliver the final installment of the Hesburgh Libraries Lecture Series for the 2013-2014 academic year at 4 p.m. April 4 (Friday) in the Hesburgh Library William J. Carey Auditorium at the University of Notre Dame.

Wofford’s lecture is titled, “Father Hesburgh and Human Rights: His Legacy and Our Bridge to the Future.” This event is free and open to the public. It will be followed immediately by a reception in Special Collections, Room 102 in the Hesburgh Library.

When Rev. Theodore Hesburgh, C.S.C., president emeritus of Notre Dame, was asked for a list of keynote speakers who could share a history of his work in human rights and inspire people to find their place in this global conversation, he put forth one name — his longtime colleague and friend, Wofford.

“When I think of who in my experience through decades of collaboration is the wisest of all, Father Hesburgh is the one. It’s a very special privilege to have a chance to thank Father Hesburgh for his great leadership in human rights, education and world peace,” said Wofford.

Wofford has held a long list of distinguished positions, including U.S. senator from Pennsylvania, counsel to Father Hesburgh on the first U.S. Commission on Civil Rights and associate professor in the University of Notre Dame Law School. He played significant roles in several presidencies, including the Eisenhower, Kennedy and Clinton administrations.

Wofford serves as the senior adviser to the Franklin Project of the Aspen Institute, launching a new effort to enable all young Americans coming of age to do a year of full-time service. In 2013, he received a Presidential Citizens Medal from President Barack Obama. Wofford has law degrees from both Howard University Law School and Yale Law School. He is author of several books, including “Of Kennedys and Kings: Making Sense of the Sixties.”

For more information about Wofford, visit the Hesburgh Libraries website.

Learn more about the 50th Anniversary of the Hesburgh Library at 50years.library.nd.edu.