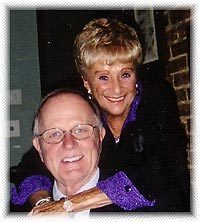 Dorene and Jerry Hammes of South Bend have made a gift to the University of Notre Dame athletics department for its renovation of the Joyce Center arena, resulting in the naming of the Joyce Center basketball media auditorium as the Hammes Auditorium.

Weve been thrilled to see the great success the University has had in raising funds and making plans for all the new athletic facilities, and we wanted to be a part of that,said Hammes.

We have been longtime members of the local community, and this generational gift has been inspired by our admiration of Fathers Hesburgh (former president Rev. Theodore M. Hesburgh, C.S.C.) and Joyce (former executive vice president Rev. Edmund P. Joyce, C.S.C.), knowing all they have done for the University and the community at large.

The Hammes Auditorium (Room C-14 of the Joyce Center, inside Gates 1 and 2) is used by the media for post-game interviews after mens and womens basketball games, as well as for a wide variety of administrative and varsity team meetings and video sessions.

Jerry Hammesparents, Romy and Dorothy Hammes of Kankakee, Ill., underwrote the construction of the Hammes Notre Dame Bookstore in 1955. When the bookstore was moved to new quarters in the Eck Center in 1999 it retained the Hammes name.

A gift from Jerry and Dorene Hammes in 2003 helped underwrite the construction of Hammes Mowbray Hall, the home of Notre Dame Security Police and the Notre Dame Post Office. Among their other previous donations to Notre Dame are a $1 million gift to establish an endowment for Campus Ministry, a $100,000 gift for a scholarship, and a $100,000 gift to endow a library collection on critical technologies in engineering. The Hammes Student Lounge in the Coleman Family Center for Campus Ministry – which stands on the site of the original Hammes Bookstore – is named for Jerry and Dorene in honor of their gift to Campus Ministry. Jerry has been a member of the advisory council for University Libraries since 1976 and Dorene was a member of the Womens Council.

The Hammes family also has been a significant benefactor of the Indiana Province of the Congregation of Holy Cross, Notre Dames founding religious community, through itsSign of HopeandLiving Faithfund-raising campaigns. The family was a major benefactor in the renovation of the Sacred Heart Parish Center at Notre Dame. Jerry received the Rev. Howard J. Kenna, C.S.C., Award in 1999 for service to the congregation and University.

Jerry Hammes is president of Romy Hammes Inc. of South Bend and chairman of Peoples Bank of Kankakee County. He is a member of the class of 1953.

The Hammesesgift is a component of the $1.5 billion Spirit of Notre Dame capital campaign. Announced last year, the campaign is the largest such endeavor in the history of Catholic higher education.