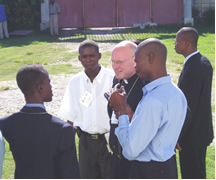 A Notre Dame program aimed at permanently halting the transmission of elephantiasis inHaitiis having the important added public health benefit of significantly reducing the burden of certain intestinal parasites.

Hookworms, roundworms and whipworms may not be pleasant to contemplate, but the parasites infect more than 1 billion people worldwide, with the Ascaris species alone estimated to affect one-quarter of the worlds population. These helminth worms disproportionately rob those living in poverty, particularly children, of micronutrients, appetite and physical growth, impair cognitive skills, and leave some victims with weakened immune systems and life-threatening anemia. Some of these burdens begin for children even before birth.

At a meeting inGenevalast month, the World Health Organization stated that helminth control is a crucial, and neglected, step toward improving public health. An editorial in the Dec. 4 edition of the medical journal Lancet called for faster distribution of deworming pills. It noted that expansion of deworming programs also would strongly contribute toward reaching most of the eight Millennium Development goals set by the United Nations. The most obvious impact would be in lowering child mortality and improving maternal health, but the Lancet editorial said that widespread deworming also would aid goals on universal primary education, eradication of extreme poverty and hunger, and promotion of gender equality.

A recent study published in the American Journal of Tropical Medicine and Hygiene by Notre Dame researchers and their collaborators in the effort to halt the transmission of elephantiasis documents that the program also is significantly reducing the burdens caused by helminths.The study was supported by grants from the U.S. Centers for Disease Control and Prevention (CDC) and the Bill&Melinda Gates Foundation.

The Universitys Haiti Program, led by Rev. Thomas Streit, C.S.C., a Notre Dame biologist, has as a principal goal the elimination of lymphatic filariasis (LF) from that impoverishedCaribbeannation. LF causes the grotesque swelling of the body known as elephantiasis, a disease in which progressive lymphatic dysfunction leads to the hideous swelling of legs, arms, breasts, or genitals. LF is aggravated by dangerous skin infections whose heat can become so intense it causes second-degree burns. More than 2 million ofHaitis 8.3 million people are believed infected with the mosquito-borne helminths that cause LF. Haitians afflicted with LF suffer social, spiritual and economic isolation due to their terrible disability.

The program to forever eliminate LF incorporates as a major component the mass delivery of the anti-helmintic drug albendazole, which has been donated by the pharmaceutical firm GlaxoSmithKline as part of a Global Alliance to Eliminate LF fromHaitiand 80 other countries. For the past five years, an impressive effort to interrupt transmission of LF to the next generation has been focused on distributing diethylcarbamazine (DEC) in combination with albendazole once a year to all people living in communities where the infection is found. The combination drug therapy wipes out immature filarial worms in the bloodstream and prevents them from being transmitted to uninfected people.

To date, more than 1 million Haitians have received the treatment. In addition, under the leadership of the Haitian Health Ministry, Notre Dame, and principal partners such asHolyCrossHospital, the CDC and UNICEF have been working to fortify the Haitian salt supply with DEC and iodine, dramatically increasing still further the number of people who will receive treatment.

Led by Notre Dame-supported researcher and physician Madsen BeaudeRochars, workers assessing the effectiveness of the combination drug therapy noted that the treatment had an important collateral benefit: a reduction in the prevalence and intensity of the intestinal helminths, and a hint that community-wide transmission may be slowed along with the filarial parasites.

Some 120 million people have LF, with 1 billion at risk of infection in endemic countries likeHaiti. The new study suggests that countries with a treatment program for LF will enjoy these same important collateral health benefits wherever nations and institutions are supporting the global push to stop LF with drug combinations including albendazole.

The recent Lancet editorial noted,Worm control rarely makes the headlinesworms are just not sexy.For the worlds poorest people, however, the benefits of deworming through combination drug therapy along the lines of the Notre Dame program represent a thing of beauty.