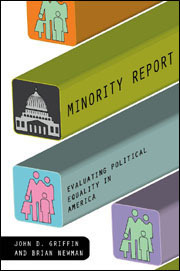 John D. Griffin, assistant professor of political science at the University of Notre Dame, is co-author ofMinority Report: Evaluating Political Equality in America,recently released by the University of Chicago Press.

One of the first books to compare the representation of African-Americans and Latinos to that of whites,Minority Reportcontends that congressional decisions and federal policy tend to mirror the preferences of whites better than those of either minority group, even after accounting for income disparities.

Griffin and co-author Brian Newman of Pepperdine University use different measures of political equality to reveal which groups get what they want from government and what factors lead to their successes.They illustrate the surprising degree to which group population size, an issues level of importance, the race or ethnicity of an office-holder, and electoral turnout can affect how well government action reflects the views of each person or group.The book goes beyond statistical analyses to address the root question of what equal representation really means.

A member of the Notre Dame faculty since 2002, Griffin earned his doctorate from Duke University.