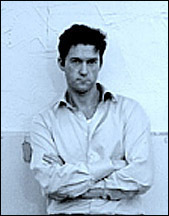 The University of Notre Dames Graduate School will present its Distinguished Alumnus Award to Michael D. Collins, the acclaimed author of eight books, during the Graduate School Commencement Ceremony Saturday (May 17) at 10 a.m. in the Joyce Center.

The Distinguished Alumnus Award was established last year to mark the Graduate Schools first distinct commencement ceremony and is presented to an individual who has received a graduate degree from Notre Dame and made a difference to his or her field, community or society at large.

Collins attended Notre Dame from 1983 to 1987 on an athletic scholarship in cross country and track. He earned a master of arts in creative writing from Notre Dame in 1991 and a doctorate from the University of Illinois in 1997.

In 1995, while pursuing his doctorate, Collins was stabbed repeatedly and left for dead on the streets of Chicago during a vicious mugging. During his convalescence, he made a solemn promise that if he recovered, he would devote his running interests to fund-raising activities and exploring the world.

Almost two years after being stabbed, Collins journeyed to the Antarctic for The Last Marathon, winning the event and beginning his rise as a premier extreme athlete in remote endurance running. His accomplishments include winning the North Pole Marathon, the Mount Everest Marathon, the Himalayan 100 Mile Challenge and the Sub-Shahran Marathon.

Through sponsors, Collins supports humanitarian programs and literary programs throughout the world for underprivileged children and also supports literary prizes in the United States.

In 2007, Collins finished fifth at the USATF 50-Mile Championships (an exceptional performance for a 43-year-old), qualifying for a spot on the United States national team. He opted to represent his native Ireland at the 2007 World 100k Championships in Holland, where he set a national record for the distance.

An adaptation of his novelThe Resurrectionistswill be released in 2009. Oscar winner John Madden, whose credits includeShakespeare in Love,will direct the film.

Collinsfirst screenplay,Julia,directed by French director Erick Zonca was just completed. The movie, which stars Tilda Swindon, the winner of the 2007 Oscar for Best Supporting Actress, is set for general release later this year in the U.S.

Collins and his wife, Dr. Heidi Collins, a 1991 Notre Dame graduate, and their four children, reside in Bellingham, Wash.