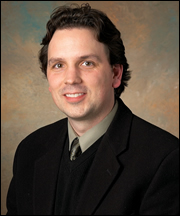 Four doctoral candidates at the University of Notre Dame have received the 2005 Eli J. and Helen Shaheen Graduate School Awards.

Named in honor of a Notre Dame alumnus and his wife, the award recognizes the top graduating doctoral degree recipients in the humanities, social sciences, science and engineering. Nominated by their departments, the Shaheen Award winners are chosen for their superior ability as exhibited by grades, research and publication records, fellowships, and other awards received during their course of study at Notre Dame, and teaching ability.

The Shaheen recipients are:

Dochuck, in history, wrote his dissertation,From Bible Belt toSunbelt: Plain Folk Religion, Grassroots Politics, and the Southernization of Southern California, 1935-1969,under the direction of George Marsden, Francis A. McAnaney Professor of History.

In his dissertation, Dochuk has articulated the grassroots origins of the American religious right as that political movement developed in the decades after World War II in one of its most fertile settings:Orange County,Calif.Much more than a local study, it is an important new interpretation of the origins of the religious right inCaliforniabased on the demographic trends seen in patterns of migrations, especially fromArkansas,TexasandOklahoma.

During his graduate studies, Dochuk taught upper level history and freshman composition courses. The author of two published articles and five in press, he has spent the past year as a Lilly Postdoctoral Fellow atValparaisoUniversity. He will join the faculty ofPurdueUniversityin the fall as an assistant professor of history.

While a graduate student, Kelley served as a teaching assistant for his departments graduate-level introductory statistics sequence and helped other graduate students design their research projects and analyze their results. The first author of four journal articles and co-author of another, he will join the faculty ofIndianaUniversitythis fall as an assistant professor of psychology.

Whytes research focuses on the fundamental role of a secretory protein, clusterin, in the biology of mammary gland development and tumor progression in breast cancer. She shows that removal of the clusterin gene induces precocious mammary gland development due to a disruption of the balance between cell proliferation and cell death. She also shows that over-expression of clusterin in breast cancer cells dramatically increases the propensity of these cells to metastasize to distant organs.

Although evaluation of the full impact of her work will require more research and confirmation by other groups, one pharmaceutical company is now collaborating with her advisers laboratory on the development of clusterin-based intervention therapies for breast cancer.

The co-author of one journal article and first author on three that are in press, Whyte has received a postdoctoral fellowship atNorthwesternUniversitys Feinberg School of Medicine.

Borrok arrived at the University with an extensive background in the mining and environmental remediation industries and is completing his doctorate after only three years. His research examines the role of bacteria and organic compounds in geologic systems. More specifically, he attempts to quantify the chemical reactions between organic components and geologic media (water and rocks) so that the fate and transport of important chemicals in the environment can be predicted.

Although it is extremely rare for an engineering graduate student to teach an undergraduate class, Borroks department asked him to do so this spring. The first author of six peer-reviewed publications, he will join the U.S. Geological Survey inDenveras a Mendenhall Postdoctoral Fellow.

After earning his bachelors and law degrees from Notre Dame in 1934 and 1936, Eli Shaheen taught at the University for five years, then served as an officer in the Army during World War II. A community leader inSturgis,Mich., he was owner and president of the Sutton Tool Company from 1945 to 1986, at which time he sold the company and formed Sturgis Enterprises.

Shaheen, who died in 1993, and his wife, Helen, supported the University in many ways, including four fellowships in theLawSchool, the Shaheen-Mestrovic Memorial on campus, and the Eli J. and Helen Shaheen Endowment for Architecture.

The Shaheen Graduate School Awards were established by an endowment from their daughters, Christine Broussard and Paula Eide.