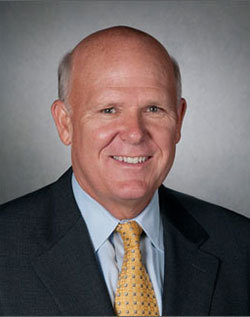 Daniel F. Akerson, chairman and chief executive officer of General Motors, will be the featured speaker for the University of Notre Dame’s Mendoza College of Business graduate commencement ceremony. The event will take place at 10 a.m. May 18 (Saturday) in Purcell Pavilion at the Joyce Center.

The Mendoza College of Business Undergraduate Commencement Ceremony will be held at 1 p.m. May 19 (Sunday) in the north dome of the Joyce Center. Roger D. Huang, Martin J. Gillen Dean of the Mendoza College, will serve as speaker. Notre Dame’s University Commencement Ceremony is from 9 to 11 a.m. May 19 in Notre Dame Stadium. Cardinal Timothy Dolan, archbishop of New York and president of the U.S. Conference of Catholic Bishops, is the speaker.

Akerson joined GM in July 2009 as a member of the board of directors. Under his leadership, GM emerged from its 2009 bankruptcy and subsequently launched a $23 billion initial public offering — the largest in history. The company currently is the leading automaker in the world’s two largest markets, China and the United States.

Prior to joining GM, Akerson was a managing director and head of global buyout for The Carlyle Group in Washington, D.C. He also served as CEO or president of several telecommunications and technology companies, including MCI, Nextel Communications, XO Communications and General Instrument.

A graduate of the U.S. Naval Academy with a bachelor of science in engineering, Akerson earned a master of science degree in economics from the London School of Economics.

Akerson serves on the boards of the U.S. Naval Academy Foundation, the Tsinghua University School and Economics and Management Advisory Board and the International Business Leaders Advisory Council of Shanghai, and is a member of the Business Council. He received the T.C. and Elizabeth Cooke Business Medallion from the College of William & Mary in 2004. In addition, he has been honored by the U.S. Naval Academy with the 2012 Distinguished Graduate Award for his lifetime commitment to service, personal character and distinguished contributions to the nation.

He co-chaired the “Leaders to Serve the Nation” capital campaign, which raised a record $254 million for the U.S. Naval Academy. Akerson chairs his family’s Blue Earth Foundation, which is dedicated to providing financial assistance to programs serving young people. In 2011, he was named “Humanitarian of the Year” by So Others Might Eat (SOME), which serves the Washington, D.C., metropolitan area.

The Mendoza College of Business was named this year as the No. 1 undergraduate business school for the fourth consecutive time by Bloomberg Businessweek. The college currently enrolls more than 1,900 undergraduate students in six majors: accountancy, finance, marketing, management consulting, management entrepreneurship and IT management.