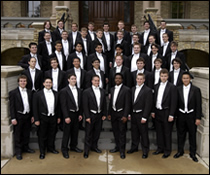 The University of Notre Dames Glee Club will give a benefit concert for one of its members, Coleman Barker, at7:30 p.m.April 10 (Sunday) in the Leighton Concert Hall of theDeBartoloCenterfor the Performing Arts.

Admission is $10 for the general public and $5 for students and seniors.Tickets are available in advance at theDeBartoloCenterticket office or by calling 574-631-2800.

A senior majoring in preprofessional studies (pre-med), Barker learned in November he had a cancerous brain tumor.He withdrew from the University and underwent surgery at the Mayo Clinic, where the tumor was successfully removed.Barker currently is undergoing chemotherapy treatments in his hometown,Sioux City,Iowa, and plans to re-enroll at Notre Dame in the fall.

Money raised from the concert will help the Barker family pay for medical expenses.Anything beyond its needs will benefit the American Cancer Society.

The 60-voice Glee Club has established itself as one of the nation’s premier men’s choruses during its 91-year history.Its repertoire spans several hundred years, including Gregorian chant, Renaissance motets and madrigals, works from the great Classical and Romantic composers, folk songs, spirituals, and works from the modern era, including barbershop, vocal jazz, and Notre Dame school songs.

The Glee Club is under the direction of Daniel Stowe, associate professional specialist in Notre Dame’s Department of Music, who also directs the University’s Symphony Orchestra and Collegium Musicum.