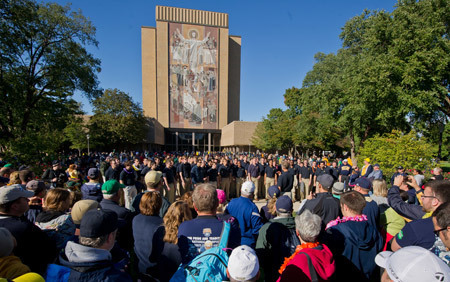 The Notre Dame Glee Club triennial Alumni Reunion took place Oct. 19-21 as part of the Notre Dame vs. BYU football game day activities. More than 250 Glee Club alumni came to campus to celebrate the 97th anniversary of the club. The reunion included a concert in which the current Glee Club sang a combined performance with alumni members. (Watch Video)

“The Glee Club Reunion weekends are always a great way for me to reconnect with friends,” said Art Panfile, a 1975 graduate. “In addition to connecting with friends who were in the Glee Club at the same time I was, by attending reunions every three years, I’ve made friends with members from the classes since I graduated.”

Established in 1915, the Glee Club has more than 1,200 alumni who share in the tradition, music and fraternity of Notre Dame’s oldest and best known choir. The Glee Club performs a wide repertoire of music ranging from football fight songs and African-American spirituals to Renaissance motets and Indian ragas. They perform six regular concerts a year at Notre Dame to sold-out audiences and tour twice a year to locations around the United States, and occasionally around the world. Members also participate in service initiatives on campus and around South Bend.