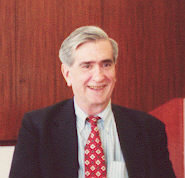 A gift from the estate of the late Philip L. Quinn, John A. O’Brien Professor of Philosophy at the University of Notre Dame, will endow an annual fellowship in philosophy at the National Humanities Center (NHC).

Quinn, a specialist in the philosophy of religion and the philosophy of science, who joined the Notre Dame faculty in 1985, died Nov. 14, 2004. He had often spoken admiringly of the NHC, regarding it as crucial for the nurture of liberal arts scholarship, and for many years reviewed fellowship applications and served on the center’s selection committee.

After Quinn’s death, the co-executors of his estate, his close friends Paul Weithman, a professor of philosophy at Notre Dame, and Mary Lou Solomon, an attorney and 1981 Notre Dame Law School graduate, decided to endow a Philip L. Quinn Fellowship to be awarded annually in philosophy, preferably supporting young women in the early stages of their scholarly careers. The fellowship endowment will be established with $800,000 from the Quinn estate matched by $700,000 from the Andrew W. Mellon Foundation. The first Quinn Fellowship will be awarded to a member of the class of 2011-12.

“Phil Quinn loved the life of the mind and the NHC is a place where that life can be lived to its fullest,” Weithman said. “The work environment of the center would have been ideal for Phil, and I’m really sorry that he never spent a sabbatical there. He maintained a long connection to the NHC even so, and I think he would be pleased to know that a fellowship in philosophy has been established there in his memory. Concerned as he was with the place of women in the academy, I think he would be even more pleased to know that the fellowship was established to help female scholars. Phil’s gift will help to fulfill a lot of dreams for generations to come. I can think of no better way to commemorate his life-long commitment to philosophy.”

Quinn was the author of more than 100 articles and reviews in various philosophical journals and anthologies. He also was the author of “Divine Commands and Moral Requirements” and “The Philosophical Challenges of Religious Diversity” and the co-editor of “A Companion to Philosophy of Religion.” He held several positions in the American Philosophical Association including the presidency of its Central Division and chair of the National Board of Officers. He was elected to the American Academy of Arts and Sciences in 2003.

Founded in 1978, the National Humanities Center is a private, nonprofit institution for advanced study in the humanities.