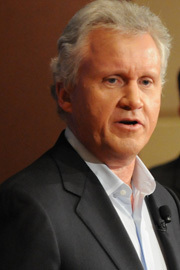 The topic of the 2009 GE Live forum hosted by the University of Notre Dame on Oct. 6 was “Winning in Today’s World.” A world, General Electric Chairman and Chief Executive Officer Jeff Immelt was quick to say to the MBA students gathered, that has radically changed since the time he graduated from Harvard Business School in 1982.

“We just have entered into an age that probably began when the tech bubble burst,” Immelt said.

Particularly in the last year, as the economy suffered a global meltdown and financial institutions failed overnight, Immelt said he learned the importance of persistence and flexibility in order to be a leader.

“I always played for the long term,” he said. “When you have to make tough decisions, you are going to get criticized. I decided that people might hate me tomorrow, but some day they would like me again. We were playing a bigger game.”

Immelt appeared with GE chief financial officer and Notre Dame alumnus Keith Sherin at the interactive forum at Notre Dame’s Mendoza College of Business. The event, hosted by CNBC’s Mary Thompson, also a Notre Dame graduate, was simulcast live to six other business schools: Georgetown, Indiana, Duke and Dartmouth; INSEAD in France; and IESE in Spain. Students from each school had opportunities to ask questions of the GE executives during the 1½ hour session.

Most of the questions concerned the lessons learned by the financial industry and GE in the past year of financial difficulty, and what advice Immelt and Sherin had for MBAs just starting their careers.

Immelt mentioned the 2009 Gallup Confidence in Institutions survey that found people’s trust in the military at about 80 percent, while their trust in big business was 16 percent, the lowest level in the list.

For companies, including GE, rebuilding that trust starts with a foundation of competitiveness and integrity, he added. Sherin and Immelt emphasized that transparency with stakeholders about the company’s financial status is critical, particularly regarding CEO pay, and that establishing a culture of clear values supported by an infrastructure that picks up the “red flags” is key.

“For us, it’s easy,” Sherin said. “It’s one strike and you’re out with our leadership team. Values start at the top, and everyone in the company is devoted to that culture.”

As for the economic recovery, Immelt said he is realistic but optimistic, citing several signs that the economy is stabilizing, including strengthening capital markets, consumer saving rates, the “decoupling” of world economies from the United States – meaning that other countries are seeing growth independent of U.S. events – and government reform measures taking place worldwide.

But for the United States to keep its competitive edge, Immelt pointed to the importance of rebuilding its eroded manufacturing base and export industry, as well as improving the number of engineers and scientists graduating from American schools. Developing countries, on the other hand, often envision themselves as exporters and don’t consider importing American goods – a vision they need to change for the global economy to work.

The GE team especially emphasized that the development of green energy is critical for the future of the global economy. The company’s “ecomagination” program is dedicated to applying innovative technology to solving environmental challenges. The program comprises GE efforts in such areas as wind energy and smart-grid technology.

“Ultimately, the argument I would make is that it is about economics in the end,” Immelt said. “There is going to be massive job creation in green energy. And this country is either going to win, or it’s not going to win. Right now we are not positioned to win. We are having yesterday’s conversation today.”

Another issue of central importance to GE is health care, a “big, complicated issue” that isn’t going to get easier, according to Immelt.

“It’s more important that we go forward on health care and not backwards,” he said. “If we fail now, it might be another generation before we take it on again. That would be dangerous for everyone in this room.”

Immelt earned an appreciative laugh from the audience when he described his b-school experience.

“The one class I hated because I thought it was so soft was organizational behavior,” he said. “I never paid attention. Now it’s all I do. I wish I had studied harder.”

He described b-school as a time to gain confidence to try things and fail.

“Do what you want to do; follow your path,” Immelt said. “I wanted to be a manager when I graduated from business school. So if I wanted to be a good manager, I joined a company that was good at managing … The good thing about b-school is you get two years to figure out what you want to do. Have a vision for yourself, and follow that vision. If you do that, you aren’t going to fail.”