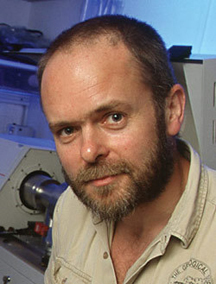 The National Aeronautics and Space Administration (NASA) has named Clive R. Neal, professor of civil engineering and geological sciences at the University of Notre Dame, to a select team of scientists tasked with growing the nation’s technical capabilities in lunar science and developing educational opportunities in space science.

The initial members of the agency’s newly formed Lunar Science Institute (LSI) represent Notre Dame, the Lunar & Planetary Institute, the Universities of Arizona, Houston, and Maryland, Rice University, Southwest Research Institute and National Institute of Polar Research. The team will investigate if the Earth and moon were resurfaced by asteroids and comets billions of years ago and how such heavy bombardment influenced the evolution of life on earth.

In his role on LSI, Neal is part of a team that will be studying rocks collected at all of the Apollo landing sites, but especially those gathered around the Apollo 16 site. These particular regolith breccias (rocks formed by shock and the intense heat of an impact) are believed to be on the order of 4 billion years old and theorized to have been formed during a time and in an environment in which intense impacts were common. Extracting samples from existing breccias, the team will analyze the rocks via optical and electron microscopy to more conclusively determine the age of the breccias and the veracity of the lunar cataclysm hypothesis, as well as its probable effect on the inner solar system.

A member of the Notre Dame faculty since 1990, Neal is a member of the Mineralogical Society of America, Geological Society of America, American Geophysical Union, American Association for the Advancement of Science and National Association of Geoscience Teachers. He currently is chair of NASA’s Lunar Exploration Analysis Group and the Science and Technology Panel of the Integrated Ocean Drilling Program.