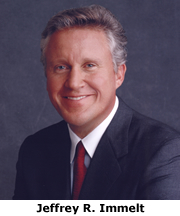 Jeffrey R. Immelt, chairman and chief executive officer of General Electric Co., will be the principal speaker and the recipient of an honorary doctor of laws degree at the University of Notre Dames 162 nd Commencement exercises May 20 in theJoyceCenterarena on campus.

During his five-plus years as head of the worlds second largest company, Jeff Immelt has demonstrated the innovative philosophy, leadership traits and personal integrity that make him a business executive worthy of emulating,said Rev. John I. Jenkins, C.S.C., Notre Dames president.We are delighted that he will join us in May to speak to our graduates and accept an honorary degree.

Immelt, 50, has led Connecticut-based GE since Sept. 7, 2001, and is widely regarded as one ofAmericas most successful and thoughtful business leaders. He has won particular attention in the last two years forEcomagination,an initiative to reduce GEs environmentalfootprintby the adoption of clean, earth-friendly technologies.

GE makes and sells products and services ranging from jet engines and home appliances to television broadcasting and power generation equipment. It employs more than 300,000 people worldwide and had revenues in 2006 of $163.4 billion. Its stock is among the most widely held in the world.

A native ofCincinnati, Immelt graduated fromDartmouthCollegein 1978 with a bachelors degree in applied mathematics. In 1982 he earned his master of business administration degree fromHarvardUniversity.

He joined GE the same year and began the steady rise that led to his selection in 2000 to succeed the legendary Jack Welch. As chairman and CEO, he has consistentlyproduced financial returns that exceed those of the standard market indices.

Immelt has attracted as much attention recently for his environmental initiative as for GEs financial success. When launching the program almost two years ago inWashington,D.C., he asserted that balancing business considerations and the needs of the environment wereno longer a zero-sum game,thatthings that are good for the environment are also good for business.

He committed GE to more than doubling its research and development budget for environmentally friendly technologies, and to a 1 percent reduction in greenhouse gas emissions and a 30-percent increase in energy efficiency by 2012.

In 2005 and 2006, Barrons magazine named Immelt one of the worlds best CEOs, and under his leadership GE has been namedWorlds Most Admired Companyin a Fortune magazine poll, and the worlds most respected company in polls conducted by Barrons and the Financial Times.

Immelt serves as chairman of The Business Council and is on the boards of Catalyst, which is devoted to advancing women in business; Robin Hood, which focuses on addressing poverty in New York City; and the New York Federal Reserve Bank. He and his wife, Andrea Allen, and their daughter reside inConnecticut.