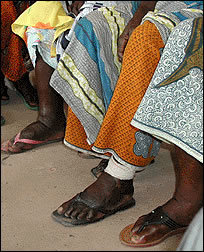 The donated ultrasound systems, called LOGIQ Book XPs, provide technology that is well suited for poor and rural conditions such asHaitis. While the LOGIQ Book XP weighs only 10 pounds, it is a full-featured, portable ultrasound system that will enable doctors to provide diagnostic exams throughoutHaitiand assist physicians in planning treatments for LF.

Notre Dames Haiti Program, under the direction of Rev. Thomas G. Streit, C.S.C., and in collaboration with the U.S. Centers for Disease Control is working with the Haitian government to eliminate LF, which affects more than 120 million people around the world. More than 40 million are seriously incapacitated and disfigured by the disease.

It is our hope that this modern ultrasound equipment we are providing to Notre Dames Haiti Program will aid in the diagnosis and medical care of Haitian families,said Omar Ishrak, president and chief executive officer of GE Healthcares Clinical Systems.

Haiticontinues to be one of the poorest countries in the world, affected by both natural disasters and continuing civil insecurity. Despite these obstacles, the campaign to eliminate LF continues to make dramatic progress. Diethycabamazine (DEC) has been found to be effective in halting the spread of LF. Last year, more than 1 million people were treated during Mass Drug Administration (MDA) of DEC and iodine, while thousands with LF have been taught techniques to help prevent disease progression. Hundreds more have had surgical repair for damage caused by LF, and doctors have been trained in the surgical techniques that prevent reoccurrence of urogenital filarial disease.

Studies at Haiti Program sentinel sites have shown that MDA leads to significant declines in other diseases, such as intestinal worms, enhancing cognitive development of children and reducing the burden of life-threatening anemias. Given what is known about the effectiveness of MDA in fighting intestinal worm infections, anemia and growth and cognitive effects, these results confirm the tremendous collateral public health benefits associated with MDA.

Notre Dames Haiti Program has been working with the Haitian government to fortify table salt with DEC and iodine. The goal is to distribute this cure toHaitis 9 million people most effectively and to strike a final blow to LF. Iodine provides dramatic benefits by increasing IQ in areas of deficiency and also by preventing goiter.