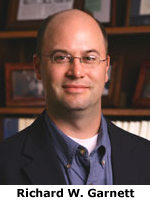 Its an easy assumption to make:Notre DameLawSchoolassociate professor Richard Garnett must be the product of a Catholic school education. As a legal expert might advise, * consider * the evidence:

He is Catholic, converted as a boy with his parents and sister.

He has dedicated substantial professional and scholarly energy to the history and challenges facing Catholic schools.

Since coming to Notre Dame in 1999, Garnett has gained national recognition as an expert in the constitution issues surrounding education reform and school choice, and he writes frequently on religious freedom and church-state relations in American law. ** (His spouse, Nicole Garnett, also an associate professor of law, now focuses on local government and land use questions, but also has extensive experience on the front lines of many of the most significant school choice cases.)

Serving the past year on a University task force on the future of Catholic schools, Rick and Nicole chaired the ** subcommittee that urged theU.S.bishops to commit themselves to the politically charged fight for school choice, and to make the case, as teachers and pastors, that school choice is an issue of basic social justice.

As it turns out, however, Garnett did not attend Catholic schools.

Some might say its precisely because we have come to appreciate what we missed growing up * that we got into the issue of school choice in law school,says Garnett, whose early school years were spent in an evangelical * Protestant school inAnchorage,Alaska.

What started as a political action issue has become, for us, an issue of religious freedom and solidarity with the poor,he reflected before Christmas as he and Nicole prepared to spend the spring semester as visiting faculty at the University of Chicago Law School.

Garnetts support of Catholic education has become multidimensional during his time at this Catholic university. In this parish-rich community, he now sees dimensions of the issue well beyond legal parameters

Our great experience with our parish school,he says,has really brought home the fact that Catholic schools are crucial to Christian community and formation in the faith.

This conclusion also is emphasized in the recently released report on the future of Catholic Schools ( http://president.nd.edu/catholic-schools ).And, Garnett observes, the vitality of these institutions depends not just on church-state politics, but on the embrace and support of lay Catholics.

After Vatican II, as Catholics increasingly moved into the mainstream of American suburban life, and as the role of laypeople became more prominent, Catholics began to hear and to think that any number of school options were suitable for their children. Religious education, it was said, could be handled through weekly special instruction, known as CCD.

As a result, many ** Catholics began to choose what they perceived to be higher quality public or private schools. In urban areas, they began to eschew underfunded schools whose populations were, or were perceived to be, at risk.

No Catholic should have to choose an inferior education simply out of loyalty to the Catholic past, or to prop upsubstandard parish schools,Garnett says. **

But heightened attention to Catholic schools could improve their quality as well as energize the school choice debate.

Think what we could do, and what our schools could be, if we doubled the number of Catholic ** parents who send their kids to Catholic schools,Garnett says.

The legal aspects of school choice are examined largely at the state and local level these days, following key U.S. Supreme Court decisions earlier this decade. On one hand, the court has ruled that school choice programs may include religious school options. But a subsequent case failed to protect religious schools from being excluded from public programs.

Legal issues aside, research done at Notre Dames Institute for Educational Initiatives (where both Garnetts are faculty fellows)is helping us understand and appreciate the benefits of Catholic education and the contribution it makes not only to the Church, but to the community,Garnett said.

For Garnett, it is worth emphasizing and celebrating the fact that students who attend Catholic schools appear more likely to become engaged, active members of society.

Ultimately, Garnett says, he has come to see Catholic schools as essential for renewing the Church itself.

We need to be reminded that the faith is part of everyday life, not just a Sunday activity,he said. * Catholic schools, in little ways, tell people that to be Catholic is to build and live * an integrated life.