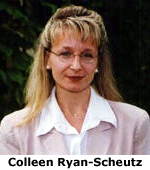 Colleen Ryan-Scheutz began life with feet planted in two cultures: Italian and Irish. And as an academic she remains firmly planted in two distinct areas.

This year, Ryan-Scheutz is seeing the publication of two books whose common thread is Italian language and culture, but whose approaches are distinct.

A book she has co-edited,Set the Stage: Teaching Italian Language, Literature and Culture through Theater,is forthcoming from Yale University Press. The volume discusses teaching all aspects of the Italian curriculum, language, literature and culture through theater and theater techniques.

Notre Dame students experience the advantages of such instruction in the Italian Theatre workshop. Since 2002, Ryan-Scheutz, director of the Italian Language Program and associate professor of Romance Languages and Literatures, has been the faculty advisor for the workshop.

The play gives them a chance to study, in depth, a piece of literature,she says.They do character analysis, literary analysis. We focus on one piece, but study the author in a time period and examine socioeconomic conditions presented in the play.

Actually acting out the playhelps them appropriate language and the culture in mind, the body, and their spirit.

Ryan-Scheutz herself was a bit slow to appropriate her own Italian heritage. But once she began, she found thatItalyand its culture appropriated her.

A Ryan by birth, it is her mothers family who is Italian, with Santinis and Puccinis on one side of the maternal family tree or another. When she came to Notre Dame as an undergrad in the late 1980s, Ryan-Scheutz majored in French and political science and spent a year in theAngers,France, program. While there, she decided to visit her relatives in nearbyItaly.

I had an awakening,she recalls.Why didnt I ever study Italian?She began as soon as she returned to Notre Dame for her junior year.

After graduating, she lived inItalyfor three years, teaching English as a second language in a town midway betweenPisaandFlorence. By her third year, she began to study part time for a masters degree in Italian fromMiddleburyCollege, and in 1993 she enrolled inIndianaUniversitys doctoral program.

Her focus at that point was not on theater, but on film, particularly the work of Pier Paolo Pasolini. Today, Pasolini may be most remembered in theU.S.forThe Gospel According to Saint Matthew,which followed Christs life through the disciples eyes.

Pasolini was considered a giant of European filmmaking when the after-effects of World War II and the clashing interests of socialists and capitalists were impacting Italian culture. Telling stories through strong female characters, Pasolinis works exposed his concerns about the negative effects of modern life on classic Italian culture.

He used the private aspects of the family, or he merged the private identities of his female figures, with more public or political concerns, such as the plight of marginal social classes, social diversity, the poorthings that were important in the 1960s in Italy,Ryan-Scheutz says.

Her research on Pasolini culminates in July with the release ofThe Sex, the Self and the Sacred: Women in the Cinema of Pier Paolo PasolinibyUniversityofToronto Press.

The publishers notes credit the book for its advances in feminist theory. At Notre Dame, Ryan-Scheutz has been credited as an outstanding role model for women, receiving the 2003 Distinguished Notre Dame Woman Recognition Award.

She says her career will continue on dual paths when she returns from leave. She currently is engaged in a third pursuit. Or, given that Italian culture reveres both cuisine and family, well say she is appreciating another of the spices of lifethe recent birth of her second child.