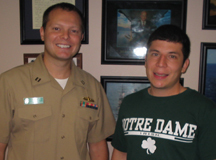 You wont hear first-year student Aaron Gutierrez complain that his room in Keough Hall is too small.

My dorm room is huge compared to what Im used to,says the freshman from San Antonio, Texas, who takes the phrasenon-traditional studentto a whole new level.

Gutierrez is unusual among his classmates in a number of ways. First, theres the age difference – he graduated from high school in 2001 and turned 25 in September. Then theres the matter of life experience. While his fellow freshmen are, generally speaking, straight out of high school, he comes to Notre Dame directly from the United States Navy, where he has served for the past six years as a nuclear engineer, stationed for much of the past year on the U.S.S. Dwight D. Eisenhower in the Persian Gulf.

Its been six years since Ive had to spell the word calculus, much less do it,Gutierrez says of his transition from sailor to student.I think the course work would have been difficult for me coming straight out of high school, much less six years out of any kind of structured academic setting. Most of these people were taking AP chemistry and calculus a few months ago and Im trying to think back six years. Its a whole different ball game.

The challenges are many. In addition to the rigors of academia, Gutierrez also has had to adapt to an entirely different social climate. Since all Notre Dame first-year students are required to live on campus, this has meant settling into a residence hall filled with young adults five, six, even seven years his junior (his roommate is 18).

There are definitely a lot of awkward moments,he admits,especially when the male dorms get together with the female dorms.

Financing a Notre Dame education also is proving to be a bit tricky. Gutierrez is paying his own way and, although he has received what he calls anice scholarshipfrom the University, beyond that, he is relying on a $36,000 G.I. bill, his savings from his time in the military, and the hope of future financial aid to pay for the remainder.

All that pressure might be enough to scare some away from pursuing a Notre Dame education. But not Gutierrez, who says its all worth it to follow a dream.

Notre Dame is always where I wanted to go. I knew in middle school that I wanted to come here,recalls Gutierrez, who applied and was accepted to the University as a high school graduate, but couldnt afford to attend so joined the military as an avenue to pay for college.Everyone knew this was where I wanted to go. So I decided I was going to give it a shot and apply before I got out of the Navy.

Gutierrez received support from his division officer – who, as it happens, is a Notre Dame grad – and others he met along the way, including Lt. Mike Lipke, an assistant professor of naval science at Notre Dame who was Gutierrezwatch officer at the nuclear plant.

Thats probably one of the first conversations we had, talking about him wanting to go to Notre Dame,recalls Lipke, with whom Gutierrez remains friends and joined for an occasional tailgate party.My advice to him was absolutely, if you can do this, its a great University and I encouraged him.

Gutierrez filed his application while completing his tour of duty out on the ship, which turned out to be no small task.

Somehow I had to get all the stuff I needed out there in the Persian Gulf,he explains.I sent part of my application from Cypress, part from Dubai. It was a huge challenge just trying to meet deadlines and correspond with the University, especially when mail took two to three weeks to arrive.

When he was told to expect an answer sometime in December, he couldnt wait for the envelope to arrive. He e-mailed the admissions office on Christmas Day and received the news – he was in.That was a pretty nice Christmas gift that I got there,he remembers.

From there, it was a whirlwind of returning to port in Norfolk, Va., packing up and going home to Texas just long enough to load up for college, then heading off to Notre Dame.

Now that hes here, Gutierrez, who likely will put his training to use with a major in aerospace engineering, does have one big thing in common with his fellow students – a newfound sense of freedom.

Every minute of my day was accounted for,he reminisces of his military days.I was told what to eat, what to wear, how long I could have my hair. Everything was so structured.

Daily life is much more flexible, but not everything is so different. Gutierrez says he had grown accustomed to the sense of comradery in the military, and he has been pleased to find that, as he wrote in his Notre Dame application essay, he truly has gonefrom one blue and gold family to another.