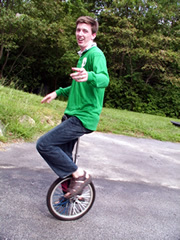 As hundreds of Notre Dame freshmen are enjoying the milestone of having tucked their first semester behind them, one young mans exciting and emotional journey will, for a couple more months, remain out there for anyone in the world to see.

Along with Conor, Project Freshman chronicled the adventures of five other college freshmen from the University ofMissouri,UniversityofWisconsin,DallasBaptistUniversity,MarshallUniversityandUniversityofFlorida.All six students shot their own video using a digital video camera provided by AOL, posted a blog on RED, through which they were able to chat online with young people between the ages of 12 and 18, and were paid $200 each week for their efforts.

The idea was to give high schoolers a glimpse of college life, through the trials, tribulations and confessionals of the six first year students.

It gave me the opportunity to learn a lot about myself, to express myself and to grow,Conor said.Part of college is maturing and developing as a person, and the work I did with AOL helped me do that.

One of my goals for the semester was to become more outgoing, because, although I would prefer not to be, I am an intrinsically shy person.So, my camera was kind of my constant reminder of that goal, as well as my tool for achieving it.Some people write in journals or take walks to reflect, but last semester I was able to set everything out in front of me on tape.

And he did just that.Conor shared his juggling and fencing skills, apprehensions over leaving home, making new friends and good grades, pride in Morrissey Hall and interhall soccer, his long-distance girlfriend, the exhilaration of his first home football game and pep rally, an Honors Program trip toCanada, and his successful campaign to become part of student government.

Notre Dame took a variety of precautions before approving the project.

The Office of News and Information, which received the original request to participate in the series, first obtained approval from Rev. John I. Jenkins, C.S.C., the Universitys president, and the Offices of Public Affairs and Communication and Student Affairs.

Undergraduate Admissions then supplied the names of two dozen incoming students it felt would represent the University well, and of the half dozen or so who expressed interest, Conor was selected by AOL.He signed a lengthycode of conductdesigned to ensure that content for the series was appropriate for REDs 5 million teen members.Notre Dames Office of General Counsel helped draft a contract between the University and AOL.The entire process took several months, but Conor didnt disappoint.

I think we were very fortunate that Conor volunteered for this gig, because he has been terrific,said Matthew Storin, who, as associate vice president for news and information, helped initiate the project.His enthusiasm for Notre Dame carried through in every episode I saw, and I think he made a good effort to show a cross section of student life, especially with that fresh eye that a freshman brings to it all.I think he’ll be a late night TV talk show host at some point in his life."

Until then, Conor is enjoying his first taste of anonymity on campus.

This job set me apart a bit, and it sure gave me a conversation starter,he said,although I must admit it will be nice to have this semester to experience Notre Dame on my own, and next year I’m looking forward to watching a football game without worrying about how much film I’m shooting.I am grateful to have had the chance to show Notre Dame to other people and to share it with so many kids.It was definitely a great experience for me, and I hope it turns out to be an excellent one for the University.