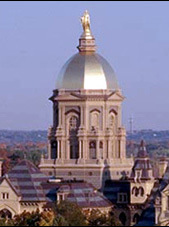 It must be money on the minds of college students, according to a recent national survey of freshman attitudes.

From their choice of university and major to the loans they will need and the relative importance of lifelong objectives, the survey found that the global economic crisis has had a widespread impact on college freshmen. A record 78 percent said that being “well-off financially” is a very important objective.

But at Notre Dame, other values trumped financial gain in the annual survey from the Cooperative Institutional Research Program (CIRP) at UCLA. Notre Dame freshmen ranked raising a family (84 percent) and helping others in difficulty (80 percent) higher than being well off (70 percent) as long-term objectives.

Notre Dame students, though, were not immune from the economic crisis. The school’s academic reputation (94 percent) and the belief that graduates get good jobs (80 percent) were more important factors for Notre Dame students in their college choice than that of their peers.

Now in its 45th year, the survey asked about 220,000 first-time, full-time freshman at 297 four-year institutions questions on everything from political inclinations and beer-drinking habits to religious attitudes and future aspirations. The answers were statistically adjusted to represent 1.4 million freshmen who entered more than 1,500 colleges and universities in 2009.

“Given that more students report taking on debt to finance college, it makes sense that employment and financial success are on the minds of this year’s entering students,” said John H. Pryor, lead author of the report and director of CIRP. “Being well-off financially was a top goal for students last year, and this year … is the highest we have seen since 1966.”

Pryor said that world events only rarely come through in the survey, such as the 2005 version that found an increased interest in volunteerism in the wake of Hurricane Katrina and the Indian Ocean tsunami. The global financial downturn has had a similar effect the last two years, he said.

More students nationwide reported having an unemployed father (4.5 percent) than at any other time in the survey’s history. And nearly 42 percent said the cost of their school was a very important factor in choosing it, up from 31 percent when the question was first asked in 2004.

Interestingly, fewer students are choosing to study business despite the concern about money. Those who plan to major in business fell to a 35-year low of 14.4 percent nationwide. Pryor speculated that the recent meltdown of the financial system influenced some students against pursuing business.

It’s not surprising that nearly twice as many Notre Dame freshmen said the school’s religious affiliation was very important to their college choice. But the survey also found that Notre Dame freshmen were much more likely than their peers to attend religious services and discuss religion regularly.