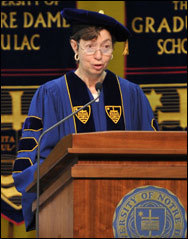 In her Commencement address today (May 17) to 2008 University of Notre Dame masters and doctoral degree recipients, Marye Anne Fox, a nationally known physical organic chemist and chancellor of the University of  California, San Diego (UCSD), urged them to exhibit unbridled curiosity, a strong, disciplined work ethic, and full freedom of academic and religious inquiry (watch video) .

This is my first piece of advice: dont lose your intellectual curiosity,Fox said.It is the doorway to truth. And it will bring you personal dividends as well as the conviction that the world is better off because of your contributions.

Dorothy Parker, an American humorist once said, The cure for boredom is curiosity. There is no cure for curiosity.Once inoculated with intellectual curiosity, you will likely attain a broader perspective and a world vision, which will be essential for your future success.

Fox, also a Notre Dame Trustee, called on the graduates to use the work ethic they developed while earning their degrees to help transform society.

My second admonition is that you keep the Midwestern work ethic youve acquired at Notre Dame,she said.Working steadily and purposefully always pays off. Even a genius as brilliant as Beethoven had a motto: Nulla dies sine linea. No day without a written line.

I am sure there were days in writing your dissertation when your muse seemed to have abandoned you, when keystrokes would not come, or, if they did, seemed to produce gibberish even to you, the worlds expert in that specific area. Persist anyway. A result too easily achieved is not likely to change the world. And as Gandhi said, it is a moral obligation to become the change we want to see in the world.

Fox pointed to full freedom of academic and religious inquiry as both the hallmarks of committed scholars and the critical skills for working effectively in a diverse world.

Finally, in your pursuit of truth, be prepared for adversity and pushback and occasional failure, sometimes from the most unlikely sources,she said.The boisterous sea of liberty is never without a wave,Thomas Jefferson taught us.

In this highly globalized planet, we must be open to new levels of cultural understanding and steadfast conviction in the faith and principles youve learned here. In the community of scholars, truth and freedom must be actively pursued in a spirit of full adherence to the principles of disciplined inquiry.

These are the values that have characterized your research here. They will be at least equally important in your independent career. It must be our goal equally to promote freedom of inquiry among brother and sister scholars around the world.

E. Mark Cummings, Notre Dame Professor of Psychology, and Mark A. Stadtherr, professor of chemical engineering, were presented with the Universitys Rev. James A, Burns, C.S.C., Graduate School Award. The award is given annually to a faculty member or members for distinction in graduate teaching or other exemplary contributions to graduate education and honors the first Notre Dame president with an advanced degree.

The Distinguished Alumnus Award was presented to author and ultramarathoner Michael D. Collins. Collins was graduated from Notre Dame  with a bachelors degree in 1987 and a masters degree in 1991. He is the acclaimed author of eight books and a world-class extreme endurance runner who uses his sport to support humanitarian and literary programs.