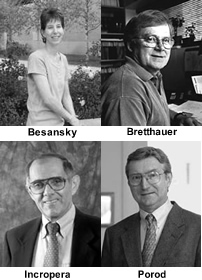 Four University of Notre Dame faculty members have been named fellows of the American Association for the Advancement of Science (AAAS) in honor of their work in the fields of biological sciences and engineering.

Besansky, who joined the Notre Dame faculty in 1997, was cited forsignificant contributions to understanding the molecular, population and evolutionary biology of Anopheline mosquitoes, major vectors of malaria inAfrica.In researching the evolutionary genomics of the mosquito, she uses classical genetic, molecular and bioinformatics approaches to understand the mechanisms behind Anopheline evolution.

Bretthauer, a member of the Notre Dame faculty since 1964, was cited forfundamental studies on biosynthesis and structure of glycosylated proteins in eukaryotic cells and in baculovirus-insect and Pichia yeast expression systems.A biochemist specializing in carbohydrate metabolism and protein biosynthesis, he has done extensive research on gylycoproteins, large molecules containing proteins and sugars whose functions in the body include controlling the interaction of cells, and the recognition of other substances by cells.

Incropera, who joined the Notre Dame faculty in 1998, was cited fordistinguished contributions to the field of heat transfer and convection and for significant contributions to engineering education as both classroom teacher and engineering dean.A member of the National Academy of Engineering and one of the 100 most frequently cited engineers in the world, his research is in the areas of free and mixed convection, double-diffusive convection, boiling and two-phase flow, materials processing and electronic cooling.

Porod joined the Notre Dame faculty in 1986 and is director of the Universitys Center for Nano Science and Technology (NDnano). He is the co-inventor of the Quantum-dot Cellular Automata (QCA) concept, a transistorless approach to computing. His research focuses on solid-state physics and its application to electronics, quantum devices and architectures for nanoelectronics, and the limits imposed by the laws of physics on computation.

The tradition of AAAS fellows began in 1874 and this year the association is honoring 376 members as fellows. Currently, members can be considered for the rank of fellow if nominated by the steering groups of the associations 24 sections or by any three fellows who are current AAAS members (so long as two of the three sponsors are not affiliated with the nominees institution) or by the AAAS chief executive officer.

The new Notre Dame fellows will be presented with an official certificate and gold and blue rosette pin on Feb. 18, at the Fellows Forum during the 2006 AAAS annual meeting inSt. Louis.