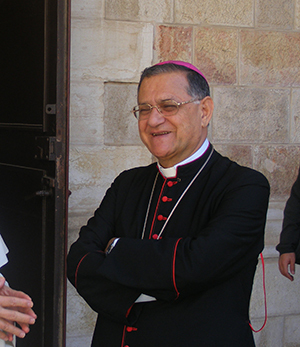 The Latin Patriarch of Jerusalem, Fouad Twal, will speak on the increasingly desperate plight of Christians in the Middle East at 4:30 p.m. Sept. 29 (Tuesday) in the Hesburgh Center Auditorium.

The lecture, “Middle East Christians’ Future: In Whose Hands?” will be introduced by University of Notre Dame president Rev. John I. Jenkins, C.S.C.

Appointed by Pope Benedict XVI in 2008, Patriarch Twal is the senior Catholic churchman in Jerusalem and the Holy Land. Calling the Catholic Church there the “church of Calvary,” he has often spoken of the entire Middle East in similar terms due to the vast displacement of Christians from their traditional homes in the war-torn region. At Notre Dame he will address the struggles of Christians in Israel, Gaza and the West Bank, the suffering of the refugees, and the effects of the arms trade on the conflicts in the Middle East.

Throughout his tenure in Jerusalem, Patriarch Twal has been involved in the work of Tantur Ecumenical Institute, which was founded by Pope Paul VI and Notre Dame’s late president emeritus Rev. Theodore Hesburgh, C.S.C. Located on a hill top between Jerusalem and Bethlehem, Tantur is a center of ecumenical scholarship, prayer and hospitality.

Patriarch Twal’s lecture is sponsored by the Center for Civil and Human Rights and is a feature of the 2015-16 Notre Dame Forum.

Established by Father Jenkins in 2005, the Notre Dame Forum has featured major talks by leading authorities on complex issues related to immigration, sustainability, global health, the global marketplace, K-12 education and the role of faith in a pluralistic society. This year’s forum, “Faith, Freedom and the Modern World: 50 Years after Vatican II,” commemorates the 50th anniversary of the publication of pivotal documents of the Second Vatican Council.