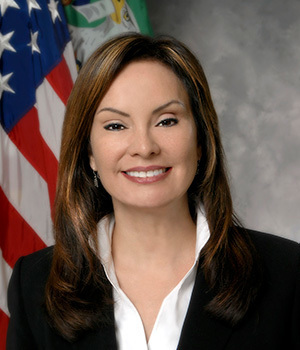 Known as “the woman behind the new $20 bill,” Rosa “Rosie” Rios, the 43rd treasurer of the United States, will speak at the University of Notre Dame on Monday (March 27). She will discuss her time as the U.S. Treasurer, including the financial crisis of 2008; her recent initiative for women’s rights, Empowerment 2020; and the role of millennials as future leaders. The public lecture begins at 7 p.m. in the Isban Auditorium in the Guglielmino Athletics Complex.

Confirmed by the Senate as U.S. treasurer in August 2009, Rios served in that role until July 2016. She had oversight of the U.S. Bureau of Engraving and Printing and the U.S. Mint, was a key liaison with the Federal Reserve and served as a senior adviser to the secretary of the Treasury.

She initiated and led the successful campaign to honor the 100th anniversary of women’s suffrage by adding women’s images on paper money. The most notable change will see abolitionist and civil rights activist Harriet Tubman replace Andrew Jackson as the face of the $20 bill, marking the first time a woman will appear on U.S. paper money in more than a century.

A Harvard University graduate, Rios began her career in real estate finance and worked in economic development and re-development in California.

The lecture is free and open to the public, and is sponsored by Student Government, Office of the President and Gender Studies Program.