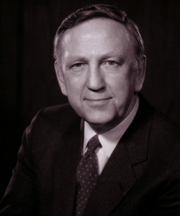 John Brademas, former U.S. Congressman and president emeritus of New York University, will deliver a lecture titled “Reflections of a Studebaker Champion” at 5 p.m. Tuesday (Sept. 7) in the Decio Theatre of the new Marie P. DeBartolo Center for the Performing Arts at the University of Notre Dame.p. Sponsored by Notre Dame’s Institute for Scholarship in the Liberal Arts, the Provost, the dean of the College of Arts and Letters, and the Center for Social Concerns, the lecture is free and open to the public.p. A congressman from Indianas 3rd District from 1959 to 1981 and a former majority whip, Brademas will discuss the role he played in securing federal defense contracts for the manufacture of trucks by former Studebaker workers after the 1963 closure of the independent automaker’s South Bend plant. His appearance coincides with this month’s premiere of “Avanti: A Postindustrial Ghost Story,” an original multimedia play about the demise of the Studebaker Corporation written by Jessica Chalmers, associate professor of film, television and theatre at Notre Dame.p. During his 22-year congressional career, Brademas served as a member of the House Committee on Education and Labor, in which he played a leading role in writing most of the federal legislation enacted during that time concerning education, services for the elderly and the handicapped, and the arts and humanities, including the establishment of both the National Endowments for the Arts and the Humanities.p. A graduate of Harvard and Oxford Universities and a Rhodes Scholar, Brademas served as president of New York University from 1981 to 1992. Among his many honors, he has been awarded honorary degrees by 52 colleges and universities and has received the annual Award for Distinguished Service to the Arts from the American Academy and Institute of Arts and Letters.p. “Avanti” is large-scale, innovative production that depicts the closing of the Studebaker operation as an event foreshadowing later plant closings in communities across America. Named after the stylishly futuristic car that was the company’s last-ditch effort at financial solvency, “Avanti” is a story about the remains of industry – stylistic, architectural, personal, and economic – haunting the landscape and psyche of the country.p. The play will open Sept. 24 and will run through Oct. 3 in a 70-seat, site-specific theater located inside the old Deluxe Sheet Metal Factory space in downtown South Bend. More information about “Avanti” is available on the Web at http://avanti.nd.edu.p. _Contact: Robin Slutsky, “Avanti” producer, 574-292-6205, rslutsky@nd.edu _ p. __