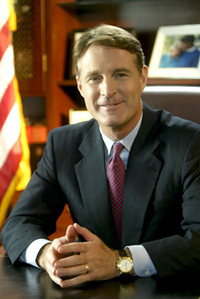 Former U.S. Senator and two-term Indiana governor Evan Bayh will be the keynote speaker for a featured event of the 2010-11 Notre Dame Forum on Feb. 24 (Thursday) at the University of Notre Dame.

Bayh’s presentation, which is free and open to Notre Dame students, faculty and staff, begins at 7 p.m. in the Leighton Concert Hall of the University’s DeBartolo Performing Arts Center. Tickets are required and will be available at the Performing Arts Center ticket office beginning one hour before the event. There is a limit of two tickets per person.

The program is a component of “The Global Marketplace and the Common Good,” a yearlong discussion of morals in the rebuilding and reshaping of the global economy.

Sen. Bayh will address the role that government and politics play in the advancement of the common good in a global economy.

A Democrat in a largely Republican state, Bayh served two terms as Indiana’s governor (1989 to 1996) and in 1998 was elected to the U.S. Senate, winning the seat once held by his father, Birch Bayh. He never lost an election and was expected to win the senate seat again in 2010, but surprised the political establishment by announcing last year that he would not run for a third term.

Bayh was repeatedly considered a potential running mate for several presidential Democratic nominees, including former U.S. Vice President Al Gore, Sen. John Kerry (D-Mass.) and President Barack Obama. His Notre Dame Forum presentation will be one of his first appearances since his announced retirement from politics.

Established in 2005 by Rev. John I. Jenkins, C.S.C., Notre Dame’s president, the Notre Dame Forum has brought leading authorities to campus to discuss substantive issues of the day. Past forum topics have included immigration, sustainability, global health and the role of religious faith in a plural world.