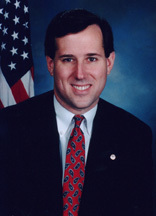 Former U.S. Sen. Rick Santorum (R-Pa.) will deliver a speech titledGathering Storm of the 21st Centuryat 7 p.m. Tuesday (Feb. 26) in the McKenna Hall auditorium at the University of Notre Dame.

While the sounds of opposition to the war are heard frequently on our college campuses, I plan to offer a perspective our students rarely hear: my views on who our true enemies are, what they believe, and why it is so important to defeat them,Santorum said.

The title of Santorums lecture references Winston Churchills history of World War II,The Gathering Storm.Santorum is writing a book onthe gathering stormof the 21st century – the challenges posed by radical Islamic fascism and its growing alliances around the world.

Santorum was a member of the U.S. House of Representatives for two terms prior to serving as a senator from 1995 to 2007. In the Senate, he was a champion of efforts to counter the threat of radical Islam, to protect victims of religious persecution, and to promote democracy and religious liberty around the world.He also spearheaded the passage of the welfare reform bill, a ban on partial-birth abortion, the Born-Alive Infants Protection Act, the Combating Autism Act, the Farmland Preservation Act, the Global AIDS Authorization Act, Health Savings Accounts, and other key pieces of legislation.

A senior fellow at the Ethics and Public Policy Center, Santorum established and directs the Program to Protect Americas Freedom.He is the author of the bookIt Takes a Village: Conservatism and the Common Good,which will be available for purchase and signing during a public reception after the lecture.

The lecture is brought to Notre Dame by the Intercollegiate Studies Institute and the Ethics and Public Policy Center as part of a yearlong series that includes talks at college campuses, including Harvard, Georgetown, Duke, Clemson and Yale Universities; the Universities of Oklahoma, Virginia and Georgia; and the London School of Economics.

NDVotes08, a student-led voter registration, education and mobilization campaign of Notre Dames Center for Social Concerns, is sponsoring the Santorum lecture as part of its2008 Election Issues Series.The talk is free and open to the public.