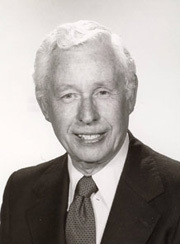 Thornton taught law at Notre Dame from 1968 to 1993, interrupting his tenure from 1973 to 1976 to serve as founding dean of the Nova Southeastern University Law Center in Fort Lauderdale, Fla.He served as director of Notre Dame’s London Law Programme from 1976 to 1978 and also was an associate dean of the Notre Dame Law School.

“I was fortunate to be Pete’s student in civil procedure in the early 1970s, as well as his colleague on the faculty in the ’80s and ’90s,”said Patricia O’Hara, Joseph A. Matson Dean of the Notre Dame Law School.“I know many alumni who would drop by Pete’s office on visits back to campus to ask him to reprise his theatrical delivery of the holding on personal jurisdiction in the famous 1945 Supreme Court case of International Shoe Co. v. Washington.He and his beloved wife, Kit, were warm hosts on behalf of the Law School on many occasions over the years.”

A New York City native, Thornton was a 1939 graduate of Brooklyn College and served in the U.S. Navy during World War II.He earned law degrees from Brooklyn Law School and taught there for 21 years before joining the Notre Dame faculty.Along with his long careeer as a teacher of law, Thornton was a member of the New York State Bar from 1941 to 2006.

Thornton is survived by four sons, Peter, Thomas, James, and John, all of them attorneys and law teachers.

A funeral Mass will be celebrated Friday (Jan. 23) at St. Joseph’s Catholic Church in Carpinteria, Calif.