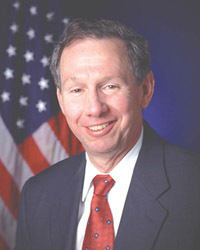 Former NASA administrator Michael D. Griffin will deliver the University of Notre Dame College of Engineering Edison lecture Sept. 8 (Thursday) at 4 p.m. in the Geddes Hall Auditorium. The lecture is free and open to the public.

A physicist and engineer, Griffin served from April 2005 to January 2009 as the 11th NASA administrator, overseeing work on the future of human spaceflight, the fate of the Hubble telescope and the agency’s role in understanding climate change. He previously was NASA’s associate administrator for exploration and he also has served with NASA’s Jet Propulsion Laboratory and as head of the space department at Johns Hopkins University.

Notre Dame awarded Griffin honorary doctorate at this year’s University Commencement Ceremony. In 2007, he was included in the Time 100, the magazine’s list of the 100 most influential people. A 2010 Space Foundation Survey ranked him as the seventh most popular space hero.

Since leaving NASA, he has served as eminent scholar and professor of aerospace and mechanical engineering at the University of Alabama Huntsville. He also is the incoming president of the American Institute of Aeronautics and Astronautics (AIAA).

The College of Engineering’s Thomas Edison Distinguished Lecture Series is funded by a grant from the Edison Foundation.