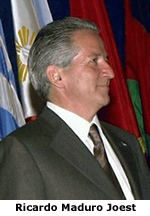 Ricardo Maduro Joest, former president ofHonduras, will deliver a public lecture on political and economic issues in Latin America at 6 p.m. Monday (Oct. 9) in theHesburghCenterauditorium at the University of Notre Dame.

TitledNew Democracies, Poverty and Governance,the talk is free and open to the public.

The Honduran president from 2002 to 2006, Maduro was the sixth leader of the country to be elected sinceHondurasreturned to democracy in 1982.

Maduro began his political career in the 1980s as a founding member of the Unity and Change movement, designed to reinvigorate the National Party. The movement catapulted Rafael Callejas to the presidency in 1989 with Maduro serving as campaign manager in 1985 and 1989 and as president of the National Party Central Committee. Callejas named Maduro president of the Central Bank from 1990 to 1994.

In memory of his son Ricardo Ernesto, who was killed in a 1997 kidnapping attempt, Maduro established an education foundation, FEREMA, to promote policy change in education.

A successful businessman, Maduro has founded and organized many differentcompanies, ranging from agriculture businesses to hotels. He won the 1983 Honduran American Chamber of CommerceBusinessman of the Yearaward, one of many for his business achievements.

Maduro serves on the advisory board of Notre Dames Kellogg Institute for International Studies.