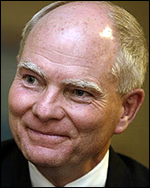 Former Indiana Gov. Joe Kernan will address a meeting of the Notre Dame Coalition to Abolish the Death Penalty on Wednesday (April 13) at12:15 p.m.in the courtroom of theNotre DameLawSchool.

Kernan, a 1968 graduate of Notre Dame and former mayor ofSouth Bend, will discuss the decision he made as governor last year to commute the death sentence of Darnell Williams, a convicted murderer who is now serving a sentence of life in prison.

Given on July 2, 2004, seven days before Williams was to be executed, Kernans was the first clemency granted by an Indiana governor since 1977, the first granted since the death penalty was reinstated in Indiana, and the first recommended by the state parole board.

Kernan has said that among the considerations on which he based his decision were Williamsupbringing and the fact that the prisoners IQ score of 78 was only three points higher than the accepted definition of mental retardation.The U.S. Supreme Court has ruled that no one who is mentally retarded may be executed, and Kernan thought the courts ruling sufficiently compelling to support a commutation of Williamsdeath sentence.

The Williams case is the subject of a recent A&E television documentary program,Countdown to Execution.