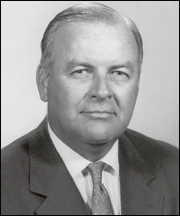 Michael A. Wadsworth, director of athletics at the University of Notre Dame from 1995 to 2000, died this morning of cancer at the Mayo Clinic in Rochester, Minn. He was 60.

“Mike Wadsworth was a genuine Notre Dame man who made substantial contributions to the University,” said Rev. Edward A. Malloy, C.S.C., Notre Dame’s president. “We are tremendously saddened by his passing and extend our deepest condolences to his wife, Bernie, and the rest of his family.”

Among the highlights of Wadsworth’s tenure as athletic director:

 Notre Dame Stadium was renovated and expanded by more than 20,000 seats.

 He played a principal role in negotiating Notre Dames place in the Bowl Championship Series.

 A Life Skills Program for student-athletes was established in 1996.

 Athletic opportunities for women were expanded with the addition of the now nationally ranked crew and lacrosse programs along with 22 scholarships for the new and existing teams.

 The Irish women’s soccer team won the national championship in 1995.

 Irish athletes continued a tradition of excellence both in the classroom and in competition, earning 35 Academic All-America awards.

 The Notre Dame athletic program was ranked third in the nation in a Sporting News evaluation of standards ranging from on-field to academic performance.

A 1966 Notre Dame graduate in political science, Wadsworth returned to the University after a distinguished career in law, business, broadcasting, government and athletics.

Immediately prior to his appointment at Notre Dame, Wadsworth had represented his native Canada for five years as its ambassador to Ireland. He previously was a senior executive in the financial services and manufacturing industries, a trial and appellate lawyer with the designation of Queens Counsel, a radio and television sportscaster and a newspaper sports columnist, and a rookie of the year and five-year professional for the Toronto Argonauts of the Canadian Football League (CFL).

Wadsworth attended Notre Dame on a football scholarship and, despite nagging knee injuries, won a monogram as a defensive tackle in 1964. The son of CFL great John “Bunny” Wadsworth, he himself played in the league from 1966 to 1970, during which time he earned his law degree from Osgoode Hall Law School in his hometown of Toronto.

Wadsworth practiced law from 1971 to 1981, arguing several cases before the Canadian Supreme Court while at the same time pursuing his career in the print and broadcast media. He entered the business world in 1981 as vice president for administration of Tyco Laboratories of Exeter, N.H. He completed the advanced management program of the Harvard Graduate School of Business in 1985, just after entering the executive ranks of the Canadian corporation Crownx, Inc. As senior vice president of U.S. operations for the firm’s Crown Life Insurance Company from 1987 to 1989, he participated in the successful restructuring of its U.S.-based business. He was appointed ambassador to Ireland by Prime Minister Brian Mulroney in August 1989.

After leaving Notre Dame, Wadsworth was an arbitrator and mediator for the Toronto-based law firm Stitt, Feld, Handy&Houston.

In addition to his wife, Wadsworth is survived by three daughters and their husbands, seven grandchildren, three brothers, a sister, and his mother, Catherine.

In lieu of flowers, the family requests that donations be made to the Gift of Life Transplant House, 705 2nd St., Rochester, MN, 55902.