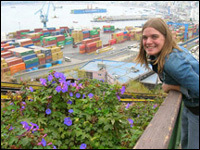 Beginning in the fall, Notre Dame students will be able to get their daily dose of news in Arabic, watch a German film, prepare sushi, study or socialize in their language of choice in a new space designed to serve as a hub of foreign language learning and internationalism at the University.

Four large classrooms on the third floor of DeBartolo Hall will be renovated this summer to create the Center for the Study of Languages and Cultures (CSLC), which will serve as the centerpiece for the College of Arts and Lettersmaster plan for advancing foreign language learning and the understanding of world cultures.

I believe that Notre Dame can become the national leader in advanced language learning,said Mark Roche, I.A. OShaughnessy Dean of the College of Arts and Letters.Italian is already there, with superb placements of graduates.We have a high retention rate in comparison with many schools that focus on language learning methodologies.

In the fall, a 14th option will be added to Notre Dames language line-upKorean.The pressing need for instruction in Korean was revealed last year when Korean-American Janet Han, now a junior, organized on her own initiative two levels of Korean language instruction on Saturday mornings.Her 25 dedicatedstudentsstudied on-line during the week and were taught by native Korean speakers on the weekends.

We do have proactive students,said Dayle Seidenspinner-Nunez, Arts and Letters associate dean and professor of Spanish.Theyre willing to go abroad and test themselves, and they often double and triple major, applying advanced language study to a variety of disciplines in a combination that is very marketable and suits their interests.

Designed to complement their efforts, the CSLC will build on an already strong foundation.

Among American research universities, Notre Dame each year has one of the highest percentages of students participating in study abroad programs, and advanced language enrollments are steadily on the rise, climbing to more than 5,000 in the past decade.

A multitude of new language enhancement opportunities has been developed as a result, including credit-bearing, pre-study abroad courses; an innovative peer tutoring program modeled on the University Writing Center in the Romance languages; and Language Across the Curriculum, which allows advanced-study language students to, for example, read primary materials in French or Spanish during a history course.

In the past three years, enrollments in Irish have nearly quadrupled, making Notre Dames trademark language also one of its most-studied.

Arabic Studies, for which enrollments have shot up by more than 650 percent in the past decade, offered its first advanced course this year.

The growth of Arabic has been amazing,said Rev. Joseph Amar, director of Arabic and Middle East studies.Were more than double the national average for across-the-board enrollments, and we have 150 students in six beginning Arabic classes.Even the big schools dont have those numbers, and weve worked really hard to get them.

Also notable is a new trend to double-major in Arabic and Chinese.

If you have any background in Middle Eastern culture or language, youre one in a million,Amar said.And if you can speak Arabic and Chinese, you can do anything.

Cultural awareness also is an important component of a new learning goals and assessment project in Romance languages and literatures, which will host national assessment consultants in the spring.

Meanwhile, upper-level enrollments in the department are especially noteworthy.

Now is a great time for the languages,said Theodore Cachey, chair of Romance languages and literatures and professor of Italian.Students instinctively know what they need and find language study enriching and rewarding.

Senior Elizabeth Hasse is an enterprising linguist who appreciates what the new center will offer.A Spanish and anthropology major, she volunteered for six weeks in Oaxaca, Mexico, studied for a year in Santiago, Chile, and took courses in Quechua (indigenous language of ancient Incas, still spoken in Bolivia, Colombia, Ecuador, Peru, Chile and Paraguay) at Notre Dame, which is one of only about a dozen universities in the United States that even offers it.She then studied Quechua in Cusco, Peru.

It wasnt just about mastering another language,Hasse said.I learned just as much about the culture and society of Andean Peru.I want to be a Peace Corps volunteer in Latin America before I go on to law school or graduate school, and now I have a window into a culture that few people, even in South America, bother to try to understand.

This is just one example of, as Roche puts it,the kind of cultural awareness and emotional attachment to a host country that aids the motivation to learn,and that the new center will help foster.