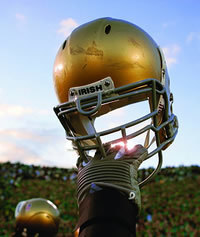 Forbes magazine rated Notre Dame as the second most valuable college football program in the country in a survey published Dec. 22.

Using a set of standardized revenue and expense streams for each university surveyed, Forbes placed the team value of Fighting Irish football at $108 million. The University of Texas was rated first with a value of $119 million.

Forbes also listed the “dividends” generated by each football program by analyzing how much money was contributed back to the university as a whole and to other athletics programs after subtracting the cost of running the football operation. The magazine also factored into the dividend equation money generated by a football program through bowl game revenue and for its surrounding community.

Notre Dame’s overall dividend was placed at $38 million, and the magazine reported that St. Joseph County was the “only county in the nation in which incremental spending topped $10 million on home football weekends this season.”

Forbes pointed out that, unlike its peers, Notre Dame does not maximize its revenue generating potential through in-stadium advertising (on large video screens or signage) or the sale of luxury suites.