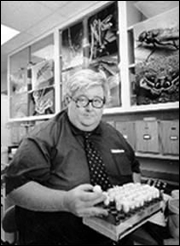 Both lectures are free and open to the public.

OMeara earned his bachelors, masters and doctoral degrees from Notre Dame, with Craig serving as his mentor. His dissertation examined geographic variation in the mosquito Aedes atropalpus , as well as the genetic analysis of auotogeny, which is the ability of some populations to produce an egg batch without a prior blood meal.

After completing his studies at Notre Dame, OMeara joined the faculty at the Florida Medical Entomology Laboratory atVero Beach. His research has focused on the population biology of many mosquito species of medical importance and particularly those that affectFlorida.

Craig, who died in 1995, spent his entire academic career at Notre Dame, joining the faculty in 1957 as an assistant professor and director of the Vector Biology Laboratory. He established a world-renowned research program in mosquito biology and genetics at the University, serving as advisor to 40 graduate students and 39 postdoctoral fellows, with whom he published more than 500 scientific papers. He also was a passionate teacher and mentor to countless undergraduate students.

From the mid-1950s until 1975, Craig studied the genetics of Aedes aegypti , demonstrating the genetic basis of traits central to the understanding of disease transmission and mosquito control. Under his direction, Notre Dame-affiliated scientists carried out some 80 percent of all genetic research on Aedes aegypti.

By the late 1960s, Craig and his associates began work in the reproductive physiology of mosquitoes, leading to discoveries that sexual receptivity in female mosquitoes is hormonally based and that the quantity of blood ingested by mosquitoes is determined by the neural system.

After the arrival in theUnited Statesof the Asian Tiger mosquito ( Aedes albopictus ), Craig feared it as a more effective transmitter of disease than native species and expanded his research to include this new menace to public health.

Craig was the first Notre Dame faculty member elected to the prestigious National Academy of Sciences.

Craigs former students occupy prominent positions in universities and laboratories throughout the country.

The George B. Craig Jr. Memorial Lecture Series is funded, in part, by an endowment established from contributions donated in his memory.