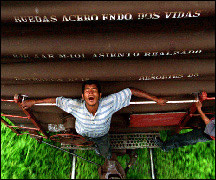 The immigrant clutches onto a speeding train, hanging on between two freight cars, exhausted and praying he doesnt slip to his death, while his friend hugs the top of an adjoining car, ducking tree branches, afraid to move, dirty, hungry and heartbroken after saying goodbye to his wife and children.

This is the true face of the Mexican immigrant experience, according to Rev. Daniel Groody, C.S.C., assistant professor of theology. A scholar who frequently writes on the emotional and spiritual challenges faced by illegal immigrants, Father Groody is expressing his work through a new film titledDying to Live: A Migrants Journey( http://www.nd.edu/~latino/units/clsc.htm .)

The film has been adopted by the U.S. Catholic Bishops and will be used as an educational tool in conjunction with their recently launched Justice for Immigrants campaign ( http://www.usccb.org/comm/archives/2005/05-117.shtml ). It also is being circulated among numerous organizations, including Catholic Charities, Catholic Relief Services, the Academy for Catholic Hispanic Theologians, No More Deaths, and Humane Borders. The film has been viewed by audiences ranging from a group atHarvardUniversityto a gathering of international religious leaders inRome.

The author ofBorder of Death,ValleyofLife: An Immigrant Journey of Heart and Spirit,Father Groody has been studying Mexican immigration for more than 15 years.

Most of them are coming to theUnited Statesbecause they want to feed their families, not to make a lot of money or take jobs away from Americans,Father Groody says. Counteracting that negative portraitthe invaders who steal American jobsis a particular goal of the film.

It struck me how much these people have gone through time and time again. Many earn only a few dollars a day and dont have any options other than to migrate,says Father Groody, who collected video in the course of his pastoral and research work in Mexican cities.

Several scenes feature Father Groody playfully interacting with Mexican children. More dramatically, the film demonstrates the brutal and harrowing nature of the voyage, following migrants as they make their illegal voyage into theU.S., through the desert in 115-degree heat, preyed upon by crooks and bandits.

As a scholar and a theologian, Father Groody sees his work as examininghow we begin to think about God from the context of the suffering of the undocumented immigrant.His research has been something of a personal voyage, as he has sought to understand the passions of those who would exclude migrants, and the needs of those who would migrate.

From a faith perspective, I have learned that those who suffer the most deserve the greatest hearing, even though, ironically, their voices are often the last to be heard, if at all. As some of the most vulnerable members of society, immigrants themselves have helped me see that whatever rightsare at stake in this debate, one of the most neglected is human rights.

The film allows viewers to take the same questioning journey Father Groody has, and to draw their own conclusions.

These are some of the things weve tried to touch on in our video,Father Groody explains.Were hoping it will be shown in small groups as a conversation starter and a way to get people to talk about how they view the migrant. In many ways, media really shapes how we perceive reality, often presenting immigration in a negative light. We are convinced there is a whole other side that most people have never seen.

In preparingDying to Live: A Migrants JourneyRev. Daniel Groody, C.S.C.,discovered an illegal immigration story in his own past.

As Father Groody was searching for a producer for his project, he received an unsolicited contact from a former NBC Radio host named Bill Groody, who also was interested in immigration stories and who had left radio for television production. He soon became Father Groodys collaborator.

They discovered that each of their familiesroots in theUnited Statesdated to a point in the early 1800s when two Irish brothers slipped into theUnited StatesfromCanada.Those men, who were our great, great, great grandfathers, eventually parted ways, and one became Protestant, which divided the family,says Father Groody.