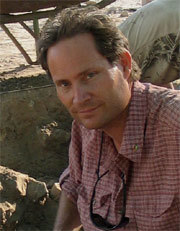 A ghost town of stone houses frozen in time for decades, the island Inis Airc, located just off the western coast of Ireland, is an uninhabited graveyard where roofless buildings remain untouched after the islanders were forcibly relocated to the mainland by the government in 1960.

Kuijt, who in 2005 wrapped up a 5-year excavation studying the origins of agriculture at a Neolithic site next to the Dead Sea in Jordan, decided his next project would take place in a more hospitable climate and now, along with some of his students, is exploring the history of Inis Airc, and other eroded, abandoned villages along Irelands west coast.

“My wife and I spent three weeks bicycling through western Ireland on our honeymoon in 1995,” he explained through a grin, “and it was just so beautiful and so accessible. I fell in love with the place.”

His reasons for ultimately selecting this corner of the world to research are more dutiful and actually evolved from his wildly popular Archaeology of Ireland class, which he teaches every two years and for which he and his students travel to Ireland over fall break to tour heritage sites.

“I wanted to look at what, in many ways, is very much an understudied problem,he said. What process created the cultural landscapes of the Irish coast? The core of it, in many ways, is the archaeology or materiality of The Great Famine. There has been surprisingly little research on the human ecology and ethnology of this period of time.”

The group is conducting a general study of the mountainous Conemarra region and case studies on Inis Airc and Omey islands, Errislannan and Streamstown Bay in County Galway. Many of the islands have no road or train access, and there are no medical facilities or services, which prompted their evacuation by the government.

“We recorded all of the abandoned cottages and artifacts, including a medieval shell mound, by mapping them using satellite recording systems and describing their features, Lash explained. We uncovered more than 100 sites.”

While the students took note of what was above ground, Mark Schurr, associate professor and chair of anthropology at Notre Dame, used a remote sensing (ground-penetrating radar) device to locate underground remains. His detection of abandoned fireplaces, shell mounds and buildings buried by sand dunes will help minimize damage in future digs.

“I was impressed with the incredibly rich archaeological record and how relatively little is known about it,” Schurr said.

Now that the groundwork has been laid, this summer Kuijt and his team will spend a week at Inis Airc recording all of the abandoned buildings and use this to understand other areas where destruction has taken place. They also will conduct excavations at several villages, where Kuijt hopes to learn more about the famine.

“We have information about potatoes being a critical resource, which they were,” he said. “But we have no understanding of what other types of food people ate, so how do we understand the impact when one particular resource disappears?”

In addition, three students will interview people who lived on Inis Airc until 1960 but now reside in nearby towns. They’ll ask what life was like back then and what understanding they have of the years before and after the famine, as well as the migration of people to the United States. They hope to convince at least a few people to journey back and be interviewed on video camera in an effort to document folklore and life on the islands.

For Kuijt and his team, there is a real sense of urgency. The people they want to interview are now senior citizens, and the homes they lived in are being destroyed at an unprecedented rate as Ireland’s wealthy construct holiday homes on the west coast.

“We’ve already assessed 36 stone buildings dating from the 1820s to 1900,” Kuijt said. “They’re not protected by heritage legislation and are viewed as commonplace. I think that they are very important for us to understand questions related to famine and immigration, but we have to do it as fast as possible.”

The project will continue through 2012, with 10 Notre Dame undergraduate students participating each year in archival and field research, including three years of excavations at several famine village sites, and several years gathering oral histories.

Of those students who were involved last summer, three Notre Dame sophomores and two seniors will present their research this spring at the annual meeting of the Society for American Archaeology.

“This international collaboration and exchange between scholars and students from Notre Dame and Ireland will help us better understand the heritage of Ireland,” Kuijt said, “and build upon the strong cultural and social links that exist today between Ireland and the United States.”