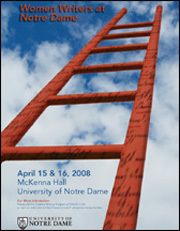 Distinguished writers Alice McDermott, Katherine Vaz and Lily Hoang will be the featured authors at the University of Notre Dames first women writersconference,A Festival of Our Own,to be held April 15 and 16 (Tuesday and Wednesday) in McKenna Hall.

Presented by Notre Dames Department of English and its Creative Writing Program, all readings are free and open to the public.

McDermott, winner of the National Book Award and the American Book Award for her novelCharming Billy,will open the festival with a reading April 15 at 7 p.m. in the McKenna Hall auditorium. A Whiting Writers Award winner and author of six novels, McDermott is the Richard A. Macksey Professor of English at Johns Hopkins University. She has been a finalist for the Pulitzer Prize, the Los Angeles Times Book Prize and the PEN/Faulkner award.

A number of McDermotts novels have been New York TimesNotable Books of the Yearand a film version of her bookThat Nightwas released in 1992. Her essays appear widely and all her novels have received broad critical acclaim.

All three writers will participate in a panel discussion April 16 at 2 p.m. in Room 100 of McKenna Hall, and Vaz and Hoang will present a joint reading that evening at 7:30 in the auditorium.

Vaz, a Briggs-Copeland lecturer in fiction at Harvard University and a former fellow of the Radcliffe Institute, is the author of two novels,SaudadeandMariana,based on the true story of Mariana Alcoforado and set during Portugals 17th-century revolt against Spain.Marianawas published in six languages and selected by the Library of Congress as one of the Top 30 International Books of 1998.

Hoang is the author ofParabola,winner of the Chiasmus Press First Book Contest, andChanging,which is forthcoming this year from Fairy Tale Review Press. Her writing recently has appeared in Black Warrior Review, Quarter After Eight and the Fairy Tale Review.

An alumna of Notre Dames Creative Writing Program, Hoang earned her master of fine arts degree from the University and has taught at Notre Dame, Saint Marys College and Indiana University South Bend.