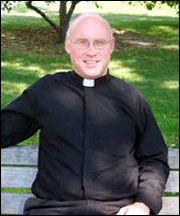 Rev. Thomas G. Streit, C.S.C., director of the University of Notre Dames Haiti Program, will deliver the 13 th annual Emil T. Hofman Lecture at10 a.m.Saturday (Sept. 17) in the DeBartolo Hall auditorium. TitledSeven Quiz Questions for Catholics in BioMedicine, and Some Notre Dame Answers,the lecture is free and open to the public.

After earning his doctorate, he accepted a postdoctoral position with the Centers for Disease Control and Prevention (CDC). Posted toHaiti, he conducted research on the transmission and control of lymphatic filariasis (LF), a mosquito-borne infection that affects more than 120 million people throughout the tropics. He also helped establish, as the first full-time CDC staff director inHaiti, what is now an international reference center for LF at theHolyCrossHospitalin Leogane.

Father Streit joined the Notre Dame faculty in 1997 as an assistant research professor of biological sciences and established the Universitys Haiti Program, an initiative at the forefront of a global alliance of partners collaborating to reach the goal of eliminating LF by 2020.

In 1999, the Bill and Melinda Gates Foundation awarded Notre Dame a $5.2 million grant to build a model program for LF elimination inHaiti. Under Notre Dames leadership, and with the collaboration of the CDC, the Haitian government and others, the program treated more than 1 million Haitians during the past year while providing critical secondary benefits to the poorest and most health-deprived population in theAmericas. The ongoing research activities associated with the program also have doubtless benefited some of the 81 other countries affected by LF, which use the experiences inHaitito build their programs.

The Emil T. Hofman Lecture Series is a medical education program sponsored bySaint JosephRegionalMedicalCenterin conjunction with the Notre Dame Alumni Association. The series honors the dean emeritus of the First Year of Studies and professor emeritus of chemistry at Notre Dame. It is estimated that Hofman taught more than 32,000 Notre Dame students, including thousands who are now physicians, engineers and scientists.