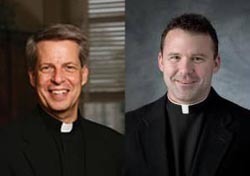 “Father Poorman has provided outstanding service to the students, faculty and staff of Notre Dame as our vice president for student affairs,” said Rev. John I. Jenkins, C.S.C. “On behalf of the University community, I thank him for his organizational leadership, his generous contributions as a Holy Cross priest-administrator, and, most importantly, his wholehearted dedication to our students. I look forward to continued collaboration with him in our efforts to reach our academic aspirations and to deepen Notre Dame’s Catholic identity.

“I am grateful that Father Doyle has accepted the challenge of following in some big footsteps. I know he will be up to it, and I enthusiastically welcome him back to his alma mater.”

As vice president for student affairs since 1999, Father Poorman has been responsible for the oversight of Notre Dame’s residential life and a variety of student services, activities and programs, including Campus Ministry, multicultural and international student affairs, student activities, Notre Dame Security Police, counseling and health services, career and placement services, alcohol and drug education, and the Gender Relations Center.

“I am profoundly grateful for the privilege of serving the University for the past decade,” Father Poorman said. “This ministry to our outstanding students has been one of the most rewarding of my life as a priest and member of the Congregation of Holy Cross. My colleagues in student affairs are shining examples of the superb educational and pastoral leadership that characterizes Notre Dame’s student life, and I owe them and others an enormous debt of gratitude for all that we have achieved together. I look forward to a sabbatical leave during the coming year and then new opportunities for continued service at Notre Dame.”

During his tenure as vice president, Father Poorman led student affairs through a period of growth and development in numerous areas, including the integration of academics and residential life, the enhancement of programs and activities contributing to campus social life, ongoing efforts to welcome and retain a diverse student body, and continuous improvement of a broad range of services to students. He also had oversight for capital projects, including the construction of the Ryan and Duncan residence halls, a total renovation of St. Liam Hall for campus health and counseling services, the construction of Coleman-Morse Hall as the home for Campus Ministry and Hammes Mowbray Hall for the Notre Dame Security Police Department, and the establishment of the Legends restaurant and nightclub.

A native of Phoenix, Father Poorman grew up in Bakersfield, Calif., and Springfield, Ill. He was graduated Phi Beta Kappa with a bachelor’s degree in English from the University of Illinois in 1976. He earned his master of divinity degree from Notre Dame in 1980 and professed his final vows in the Congregation of Holy Cross in 1981. Ordained a priest in 1982, he served for the next three years at Notre Dame as rector of Dillon Hall and associate director of Campus Ministry. He then pursued graduate studies at the Graduate Theological Union in Berkeley, Calif., where he earned his doctorate in Christian ethics in 1990.

Father Poorman is an associate professor of theology at Notre Dame. His teaching and research concern moral theology and its pastoral applications. His undergraduate courses survey contemporary issues in Christian ethics while his graduate courses are concerned with Christian ethics, Catholic moral teaching and pastoral practice. Father Poorman is the recipient of the University’s Kaneb Teaching Award and Edmund P. Joyce Undergraduate Teaching Award. Among the subjects on which he has written and lectured are medical ethics, sexuality, Christian ministry, and Catholic higher education. He is the author of “Interactional Morality” and editor of “Labors from the Heart,” a collection of essays on mission and ministry at Notre Dame. While serving full time on the faculty, he directed the Department of Theology’s master of divinity program for seminarians and lay ministers.

Father Doyle, ordained at the Basilica of the Sacred Heart in 1998, has been serving since 2004 at the University of Portland, a Catholic university founded by the Congregation of Holy Cross in 1901. He currently serves as the executive vice president, a role he assumed after three years as the vice president for university relations.

“Tom led the transformation of the university relations division by establishing a clear and integrated vision for the departments of development, marketing and communications, alumni relations and events,” said Rev. E. William Beauchamp, C.S.C., Portland’s president. “He recruited superb leadership from both inside and outside the university, focused their activities and has worked tirelessly and collegially with all members of the university. The profile of this university has been raised dramatically and the effectiveness of our fundraising has never been stronger. He has been an effective leader and, all the while, a good priest. Portland’s loss will be Notre Dame’s gain.”

Prior to his arrival in Portland, Father Doyle earned his master of business administration degree from the Harvard Business School. His visible presence as a priest among his classmates and the service he provided to the Harvard community while he was a student earned him the Dean’s Award for exemplary leadership along with his degree in 2003. The year following graduation, he worked as a researcher and case writer at the Harvard Business School.

From 2003 to 2006, Father Doyle also served as steward (chief financial officer) for the Indiana Province of the Congregation of Holy Cross, the founding religious order of both Notre Dame and Portland.

Father Doyle spent his early years as a priest on Notre Dame’s campus as the first rector of Keough Hall, a campus minister and an adjunct professor of business ethics in the Mendoza College of Business. He was a respected member of the Notre Dame community and was designated the Notre Dame Class of 2001 Senior Class Fellow.

“Notre Dame has been a physical and spiritual home to me and returning again is a privilege,” Father Doyle said. “Father Poorman is not only a friend, but he has also been a mentor during my early years as a priest and rector. The student affairs division is the integrating heart of a Holy Cross education that touches the intellectual, emotional and spiritual dimensions of students, faculty and staff. I am eager to work with the talented people who serve in student affairs, Father Jenkins and colleagues across the University.”

Father Doyle, a native of Colville, Wash., is the second oldest of five children and uncle of seven nephews and nieces. He earned his bachelor’s degree in philosophy from Notre Dame in 1989. While an undergraduate, he walked on the Irish football team during the spring of 1986, served as the Grace Hall president in 1987-88 and student body president in 1988-89. After graduation, he worked for two years for Deloitte & Touche’s Seattle consulting practice from 1989 to 1991. Father Doyle received his master of divinity degree in 1996 while a Holy Cross seminarian.