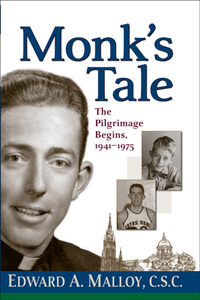 “It was a Herb Caen or Irv Kupcinet kind of commentary on school events, on people of note, or on whatever struck my fancy,” he wrote many years later, adding that he “enjoyed the notoriety that came each Friday it appeared.”

Whether the considerable notoriety University of Notre Dame President Emeritus Rev. Edward A. Malloy, C.S.C., has subsequently enjoyed is due to such editorial exertions, he has certainly kept his pen busy during the half century which has elapsed since his high school days.

In addition to his service as the University’s 16th president from 1987 to 2005, his ministry as a Holy Cross priest, his career as a theologian and his accumulation of 22 honorary degrees, he has written six books, including “Monk’s Tale: The Pilgrimage Begins,” forthcoming this fall from the University of Notre Dame Press.

The deadpan drollery of this first installment of Father Malloy’s projected three-volume autobiography suggests that he continues to enjoy commenting on events and people of note, even—perhaps especially—when the events are those of his own life and the people of note are himself and those who have most influenced him.

This part of the story concerns the first half of his life, 34 years with two universities serving as bookends—Georgetown, in whose hospital he first drew breath on May 3, 1941, and Vanderbilt, at whose 1975 commencement exercises he received, in absentia, a doctoral degree in Christian ethics.

Father Malloy’s doctoral dissertation had a ponderous title, “Contemporary Catholic Appropriation of H. Richard Niebuhr’s Ethics of Responsibility,” and explored a topic on which he could and did, in perfect modesty, claim to be the world’s leading expert. Nevertheless, he reports that having successfully defended it, the 242-page product of his scholarship “shrank considerably in its significance in my life. Like Lancelot looking for the Holy Grail, once I had found it, I was ready for the next quest.”

“Monk’s Tale” comprises a series of such quests, beginning with a boyhood enthusiasm which rapidly flowered into a mastery of basketball and an illustrious athletic career; a 1950s coming of age in the streets, sandlots, parishes and playgrounds of northeast Washington; an intellectual and academic awakening on the campus of Notre Dame; a 1962 Third World sojourn during which, on a Mexican mountaintop, he was overtaken by “a sudden sense that I was being called to become a priest”; and the successful negotiation of seminary life in the ecclesial turbulence of the years immediately following the Second Vatican Council.

Along the way there are affectionate recollections of an obviously loving Irish Catholic family as well as tributes to respected coaches, academic mentors, classmates and pals. There also are accounts of and reflections on the ferments roiling the Catholic Church and American politics and culture during the 1960s. The seminarian Malloy, for example, was disillusioned by his participation in the famous 1967 March on the Pentagon, where he noticed fellow protestors “carrying obscene signs or espousing positions that I found abhorrent” as well as “countercultural families with little children who were clearly undernourished and maybe even a bit high.” While this early disenchantment with the Age of Aquarius did little to diminish his progressive idealism, “I determined that from then on I would find other means of expressing my opinion about important public policy issues.”

He seems in “Monk’s Tale,” and his previous books, to have found just such means. Early on in the book, he observes of the name by which he is familiarly known that “like most juvenile nicknames, mine could easily have disappeared with the passing of time, but my career in athletics assured that “Monk” remained with me through the transition to Notre Dame and beyond.”

The first volume of his autobiography ought to help along those lines as well.