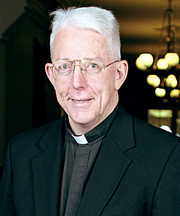 The Association of Catholic Colleges and Universities (ACCU) has presented the Reverend Theodore M. Hesburgh, C.S.C., Award to Rev. Edward A. Malloy, C.S.C., president of the University of Notre Dame from 1987 to 2005. The award is named in honor of Father Malloys immediate predecessor as Notre Dames president.

Father Malloy was recognized for his many contributions to Notre Dame as a priest, scholar and administrator, as well as his service to higher education and his efforts to promote volunteerism and combat alcohol and drug abuse.

The award citation reads in part Monk Malloy stands tall in service to the academy, to the Catholic Church, and to the nation and the world.

He has served on numerous national and international boards, including the ACCU, American Council on Education, Campus Compact, National Association of Independent Colleges and Universities, International Federation of Catholic Universities, National Advisory Council on Alcohol Abuse and Alcoholism, and the Boys and Girls Clubs of America.