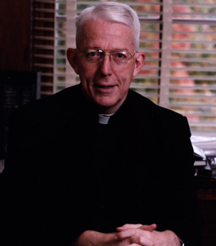 The National Center on Addiction and Substance Abuse (CASA) at Columbia University has elected Rev. Edward A. Malloy, C.S.C., president of the University of Notre Dame, to its board of directors, the organizations chairman and president, Joseph A. Califano Jr., announced today.p. “Father Malloy has been an important part of the CASA family for a number of years, participating in CASACONFERENCES and chairing our college commissions,” said Califano, secretary of the U.S. Department of Health, Education and Welfare from 1977 to 1979. “He is one of the great leaders in combating substance abuse and has served on a host of national boards on this subject. We are honored to have him join the CASA board.”p. Father Malloy currently chairs CASA’s Commission on Substance Abuse at Colleges and Universities II and the National Commission on Substance Abuse in Sports. He previously chaired CASA’s Commission on Substance Abuse Among America’s Adolescents and its first commission on college and university abuse. Additionally, he is co-chair of the subcommittee on college drinking of the National Institute on Alcohol Abuse and Alcoholism, a component of the National Institutes on Health, and in the past has served on other national and state panels committed to the cause.p. “It is a privilege to be selected to serve on CASA’s distinguished board of directors,” Father Malloy said. “CASA’s distinctive approach has established it as the leader in the field, and I am grateful for the opportunity to help work toward a world in which substance abuse is a thing of the past.”p. Other members of CASA’s board include Donald R. Keough, chair emeritus of Notre Dame’s Board of Trustees, Florida first lady Columba Bush, American Express Chief Executive Officer Kenneth Chenault, and Columbia University President Lee Bollinger.p. In his 17th year as Notre Dame’s president, Father Malloy recently announced his decision to step down at the end of his current term, June 30, 2005. Under his direction, the University has experienced rapid growth in its reputation due to substantive improvements in the size and scholarly credentials of its faculty, the academic quality and diversity of the student body, and its financial resources and physical infrastructure.p. Father Malloy is a professor of theology and, throughout his presidency, has continued to teach. Ordained a priest of the Congregation of Holy Cross in 1970, he holds three degrees from Notre Dame and a doctorate in Christian ethics from Vanderbilt University.p. Father Malloy’s academic concentration on the interplay of personal morality with public policy and professional ethics informs his own active public life. In addition to his work to combat substance abuse, he also has been a leading advocate of volunteerism and has served on numerous boards dedicated to community service.p. CASA is the only national organization that brings together under one roof all the professional disciplines needed to study and combat all types of substance abuse as they affect all aspects of society. CASA’s missions are to: inform Americans of the economic and social costs of substance abuse and its impact on their lives; assess what works in prevention, treatment and law enforcement; encourage every individual and institution to take responsibility to combat substance abuse and addiction; provide those on the front lines with tools they need to succeed; and remove the stigma of substance abuse and replace shame and despair with hope.p. With a staff of 74 professionals, CASA has conducted demonstration projects in 82 sites in 40 cities and 20 states focused on children, families and schools, and has been testing the effectiveness of drug and alcohol treatment, monitoring 15,000 individuals in more than 200 programs and five drug courts in 26 states. CASA is the creator of the nationwide Family Day initiative (the fourth Monday in September) that promotes parental engagement as a simple and effective way to reduce childrens risk of smoking, drinking and using illegal drugs.p.