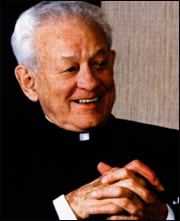 Some 1,200 family members, friends and colleagues filled the Basilica of the Sacred Heart at Notre Dame on Wednesday (May 5) for the funeral Mass for Rev. Edmund P. Joyce, C.S.C., the Universitys executive vice president emeritus. Many had occupied their pews an hour before the Mass began at 3:30 p.m.p. Father Joyce died Sunday at age 87.p. Link to Fr. Joyce’s obituary

Father Joyces casket was moved from the foot of the Bernini Altar in the Lady Chapel, where a visitation had gone on since Tuesday morning, to the baptismal font at the Basilica entrance, where it was surrounded by some 80 priests, most of them members of his religious family, the Congregation of Holy Cross. Rev. David T. Tyson, C.S.C., provincial superior of the Indiana Province of Holy Cross, sprinkled the casket with holy water to commemorate Father Joyces baptism, and covered it with a white pall on which was emblazoned the Congregations symbol, a cross with two anchors, and its motto,Crux spes unica.(The Cross is our only hope.)p. The coffin was carried in procession to the foot of the main altar, where the priests assembled and one of them, Rev. Robert S. Pelton, C.S.C., a 1949 seminary classmate of Father Joyce, placed a crucifix on the casket as a symbol of the vows they made 55 years ago when they joined the Congregation.p. The Gospel was read by Rev. E. William Beauchamp, C.S.C, who succeeded Father Joyce as executive vice president in 1987 and who is now the president of the University of Portland. The passage, Matthew 11:25-30, included the words inscribed in Latin beneath the statue of the Sacred Heart which faces the Main Building where Father Joyce worked from 1951 to 1987.Come to me all you who labor and whose burden is heavy, and I will give you rest.p. Notre Dames president emeritus Rev. Theodore M. Hesburgh, C.S.C., and Father Joyce had long ago made a pact with each other: The one who survived would eulogize the other. When Father Hesburgh came to the pulpit to keep his end of the bargain, it was obvious that he was remembering not only his oldest colleague but his best friend. He thanked the Joyce family, the staff of Holy Cross House, and Father Joyces numerous friends who had lovingly surrounded him for the difficult last two years of his life as he suffered from the effects of a stroke. He spoke of his own gratitude for his friendship withNed,and reminisced affectionately about the traveling they did together after they both retired. He said that Father Joyce had also been his confessor on several occasions, and thathe didnt spare the penance.He ended his eulogy by leading the congregation in the old prayer that Ned be granted eternal rest, that perpetual light shine upon him, and that his soul and those of the all faithful departed rest in peace.p. During the liturgy of the Eucharist, Father Tyson invited Father Hesburgh to preside with him at the altar.p. At the end of the Mass, Bishop John DArcy of the Fort Wayne/South Bend Diocese spoke of his admiration for Father Joyce and of his gratitude for the gifts that both Father Joyce and Father Hesburgh have brought to the church, the academy and the world. The Alma Mater and the In Paradisum antiphon were sung, and the casket was carried out of the Basilica into a warm and brilliant May afternoon. A wreath of roses was placed on the casket.p. Most of the mourners walked with the casket to the Holy Cross Community cemetery on a hill above the north bank of Saint Marys Lake. There among the neat rows of identical and unadorned graves, Father Hesburgh spoke again, this time on his friends behalf:I speak for Ned when I say that he loves you and he is praying for you now in heaven.Members of the Joyce family sprinkled holy water on the casket, the Lords Prayer was recited, and the Regina Caeli antiphon was sung in Latin:p. Queen of Heaven, rejoice. Alleluia! The One you were found worthy to bear has risen from the dead, just as He said He would. Alleluia! p. Most of the mourners were smiling.