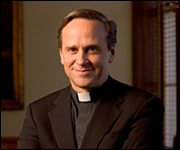 To watch a video stream of Father Jenkins’ message, follow the links below.

As the recovery from Hurricane Katrina begins in earnest inNew Orleansand other cities and towns along theGulfCoast, the University of Notre Dames new president, Rev. John I. Jenkins, C.S.C., will make a televised appeal Saturday (Sept. 17) for contributions to the Notre Dame-Katrina Fund.

In a 60-second message to be broadcast nationally on NBC during theNotreDame-MichiganStatefootball game, Father Jenkins will offer the Universitys sympathies to victims of the hurricane and seek contributionsto offer hope and help to those who are suffering.

Fans at Saturdays game will have an opportunity to assist through participation in the Katrina Stadium Collection between the first and second quarters.

All funds will be distributed as follows: 50 percent to Catholic Charities USA, 25 percent to Congregation of Holy Cross ministries inLouisiana, and 25 percent toAlliancefor Catholic Education (ACE) schools in affected areas.

Checks can be made and sent to:

* _
Note:_ * Contributions to theUniversityofNotre Dame-Katrina Collectionare being collected by the University in an agency capacity for Catholic CharitiesUSA, Congregation of Holy Cross ministries inLouisiana, andAlliancefor Catholic Education schools in areas affected by the disaster. These donations are not considered gifts to theUniversityofNotre Dame.