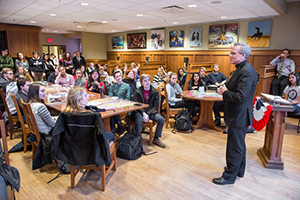 Rev. John Jenkins, C.S.C., speaks on his role on the Presidential Debate Commission

University of Notre Dame president Rev. John I. Jenkins, C.S.C., met with a group of Notre Dame students Tuesday afternoon (Feb. 2) in the Geddes Hall Coffee House for an informal discussion of the challenge of keeping faith in political life and civil discourse.

The “Pizza, Pop and Politics” event was sponsored by Notre Dame’s Center for Social Concerns as a component of ND Votes 16, a nonpartisan campaign of the center and the Rooney Center for the Study of American Democracy to promote voter education, registration and mobilization and to foster conscientious engagement in political and civic life among students.

In brief remarks and a question-and-answer session, Father Jenkins spoke, among other things, of his work on the board of directors of Commission on Presidential Debates (CPD), the nonpartisan, nonprofit organization that has sponsored and produces all U.S. presidential and vice presidential debates since 1988. “Although I’m not a political scientist, politician or a journalist,” he said, “as Notre Dame’s president, I’m privileged to sit on the boards of several institutions, but the CPD is the one I enjoy the most.”

Observing that there is no constitutional obligation for presidential debates, Father Jenkins described the CPD’s history and his own involvements since he was elected to its board five years ago. “They are wonderful, intelligent people from all parties who come together to think seriously about how we can elevate debate and reflection in our country,” he said.

There is a need for such concern, Father Jenkins said, because “the reality in our political process it is that it has become so high-stakes and with so much money involved that there is always a great danger of cynicism. The last thing both sides truly want is an open debate. They want to orchestrate their presentations and leave nothing to chance. Each candidate fights to get a sound bite, and our struggle in the CPD is always, ‘Let’s make this a real debate.’”

When observing, hearing and participating in political campaigns, Father Jenkins said, “One thing it’s important to think about is the degree to which they can become ‘infotainment,’ and so carefully orchestrated by well-paid operatives who try to make them a bit of theater.”

Father Jenkins decried “an increasing tendency to ‘dumb down’ the debate and to vilify one’s opponent. When people are asked about the motives of politicians these days, liberals tend to attribute malicious motives to conservatives, and conservatives tend to attribute malicious motives to liberals. That tendency not simply to disagree but to vilify the opposition undermines real discussion. If someone is a corrupt human being, I’m going to be less likely to put faith in his or her point of view.”

In this light, Father Jenkins was asked to comment on the controversy surrounding President Barack Obama’s addressing graduates at Notre Dame’s 2009 commencement. “I admit I was surprised at some of the reactions,” he said. “I’d not thought of this as an endorsement, just that it would be good to have the leader of our country speak to our graduates.”

“Remember: This country needs you, each of you, to be engaged in the conversation. For all the temptation to cynicism, don’t give in to it. Engage.”