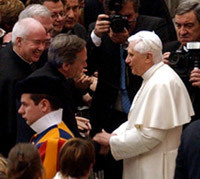 The pope shook hands with Father Jenkins and called Notre Damea great Catholic university.The University president thanked the pope and said,Keep us in your prayers.

Nearly 50 Notre Dame Trustees, officers and their spouses attended the papal audience. The Board of Trustees held its annual winter meeting Tuesday and Wednesday inRome. The group will remain in the city through the week to meet with a variety ofVaticanofficials.

Also on Wednesday, the University presented honorary degrees to L. Francis Rooney III, U.S. Ambassador to the Holy See, and the Most Rev. Rino Fisichella, auxiliary bishop ofRomeand rector ofSt. JohnLateranUniversity. The honorary doctor of laws degrees were presented as part of a University-sponsored academic convocation.

The citation for Rooney recognized him asa builder of businesses and bridges, who represents our nation to theVatican. As ambassador to the Holy See, he facilitates a dialogue between the worlds most powerful state and its most populous church. An active and generous benefactor of our University, a friend of President and Pope alike, he aspires to assist in the alignment of earthly and heavenly orders.

Bishop Fisichella was cited asa successor to the Apostles, who exercises his ministry in lecture hall as well as confessional, from lectern as well as altar. As rector of theLateranUniversityand as a shepherd of Roman souls, he serves the literate and the unlettered, revering Jesus no less in the academy than in the public square. Sounding the intelligible depths of the faith, he continually renews our Lords invitation for all to drink from the inexhaustible springs of eternal life.

In addition to the presentation of the two honorary degrees, the conference, titledContribution of Catholic Universities to the Church and Culture,included addresses by Bishop Fisichella onThe Role of the Roman Universities;Notre Dame President Rev. John I. Jenkins, C.S.C., onNotre Dame: A Catholic University within American Academe; and the Most Rev. Daniel Jenky, C.S.C., bishop ofPeoria,Ill., and a Notre Dame Trustee, onThe Congregation of Holy Cross and Catholic Education.

Pope John Paul II appointed Bishop Fisichella in 2001 as rector of thePontificalLateranUniversityand president of the Pontifical John Paul II Institute for Studies on Marriage and Family. He is considered a thoughtful, articulate spokesperson for Catholic views, especially on matters of public policy.

Last November, Rooney became the seventhU.S.ambassador to the Holy See since full diplomatic relations were established in 1984. Rooney and his wife, Kathleen, have been active in Catholic, political and civic circles at the national level and in bothTulsa,Okla., andNaplesFla., the home bases of Rooney Holdings, Inc. He is a member of the Notre Dame School of Architecture Advisory Council.