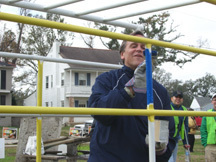 The residents of Mirabeau Gardens in the Gentilly District of New Orleans received some much-needed assistance this week in their efforts to recover from Hurricane Katrina.

More than 100 Notre Dame students, faculty, alumni, parents and staff in town for the Sugar Bowl painted, raked, planted and generally helped spruce up a community park and numerous private yards as part of a three-pronged service initiative Tuesday (Jan. 2). The area, which sat under more than 6 feet of water for two weeks after Katrina roared into the city Aug. 29, 2005, is only now beginning to recover.

Among the Notre Dame participants in the service project were Rev. John I. Jenkins, C.S.C., the Universitys president, who contributed his painting skills to some playground equipment; and John Affleck-Graves, executive vice president, who wielded a rake in a homeowners yard.

A contingent from Louisiana State University – Notre Dames opponent in the Sugar Bowl – also pitched in, led by the schools chancellor, Sean OKeefe. The states lieutenant governor, Mitch Landrieu, stopped by in the afternoon to extend his thanks to Notre Dame for organizing the event.

The real heroes of New Orleans are the people of New Orleans,said Father Jenkins.Theyve shown great resilience. Theyve come back from one of the worst natural disasters in American history and theyve just done a wonderful job and were proud to join with them in their efforts to rebuild this city.

To come down here and not help them rebuild  would be a shame; a shame for us. We are pleased to join New Orleans and help do this work.

OKeefe added:This is a great opportunity. I think it demonstrates a united effort with Notre Dame and our friends there, as well as the LSU community, to pitch in and make this a better place to live.

Earlier in the day, Father Jenkins visited the Hope Haven Center in nearby Marrero, La., to thank and encourage scores of other Notre Dame volunteers on site to assist on a variety of renovation projects. Members of the Notre Dame football team previously visited the center and moved furniture and books to prepare the way for future clean-up work. Hope Haven is a residential treatment facility for children and adolescents with mild to serious behavioral, educational, emotional and/or family problems.

Some 100 others from Notre Dame also worked Tuesday in an Operation Helping Hands project at a home near the citys 9th Ward. In all, nearly 400 volunteers affiliated with Notre Dame joined in the day of service, which was organized by the Universitys Alumni Association and Center for Social Concerns, and Catholic Charities.

The work was the latest University effort to assist the people of the Gulf Coast recover from the devastation wrought by Katrina.

Among the previous initiatives:

In October, Notre Dame was one of nine schools in the nation to receive a Katrina Compassion Award for Excellence in Hurricane Relief Service from the Corporation for National and Community Service.