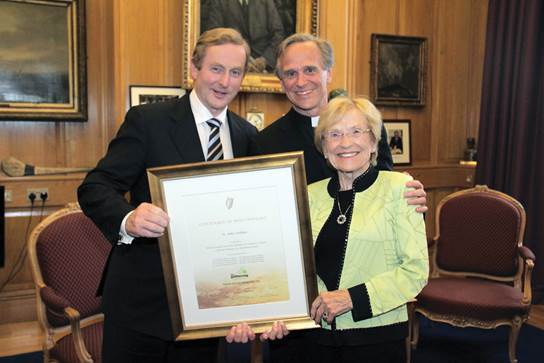 Returning from Washington, D.C., this afternoon (March 15) where he helped commemorate bipartisan American efforts to end violence in Northern Ireland, Rev. John I. Jenkins, C.S.C., president of the University of Notre Dame, said that “the bipartisan spirit employed to reach peace abroad is sorely needed now on our own soil to ameliorate discord and bring common decency to our political discourse.” He also commended House Republican leader Paul Ryan and President Barack Obama for the bipartisan tenor they established at the Speaker’s annual Friends of Ireland luncheon today in the Rayburn Room of the House of Representatives. Father Jenkins was Ryan’s guest at the luncheon.

This was Speaker Ryan’s first year hosting the luncheon since it was inaugurated in 1983 by President Ronald Reagan and Speaker Thomas “Tip” O’Neill to signify their bipartisan commitment to peace and security in Ireland. This year’s luncheon included remarks by President Obama and Irish Prime Minister Enda Kenny, who made his sixth St. Patrick’s Day visit to the Capitol. During a trip to Ireland in July 2013, Father Jenkins, accompanied by his mother, Helen Condon Jenkins, met with Prime Minister Kenny in his office in Dublin. Father Jenkins traces his Irish ancestry through County Cork.

Father Jenkins invited Speaker Ryan to return to the Notre Dame campus, and, among other topics, discussed NCAA basketball with President Obama.

“Our friendship with the Irish runs so deep that it dates back to before America was even a country,” Speaker Ryan said. “I am honored to continue a tradition begun by Ronald Reagan and Tip O’Neill, and I hope to do it justice with good stories and not-so-good jokes.”

Aside from the State of the Union, the Friends of Ireland luncheon is the one day each year that the speaker and the president are scheduled to be together in the Capitol. Watch coverage of the luncheon here.