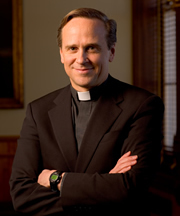 Rev. John I. Jenkins, C.S.C., president of the University of Notre Dame, has been elected to the board of directors of the Commission on Presidential Debates (CPD), the non-partisan, non-profit organization that has sponsored and produced all U.S. presidential and vice presidential debates since 1988.

“Father Jenkins is a respected voice in higher education, and we are very pleased he will join the CPD’s board as we launch plans for the 2012 debates,” said Frank J. Fahrenkopf Jr. and Michael D. McCurry, co-chairmen of the commission. “He has demonstrated, through his words and actions, a serious and sustained commitment to civil discourse in society, which is consistent with the commission’s commitment to respectful and informed political dialogue.”

A strong proponent of civil discourse, Father Jenkins articulated his point of view in a speech this year at Emory University:

“Such divisiveness makes politics not only unpleasant. It makes it harder to come together to address our nation’s challenges. If we choose to attack our opponents before we have taken the time to understand them, if we prefer denunciations to genuine dialogue, if we seek political victory rather than constructive compromise…we will not be able to find solutions to the problems before us.”

A member of the Notre Dame philosophy faculty since 1990, Father Jenkins is the author of the book “Knowledge and Faith in Thomas Aquinas.” He is the recipient of numerous honors, including the Ellis Island Medal of Honor and the American Irish Historical Society’s Gold Medal, and he was elected last year to the American Academy of Arts and Sciences, an association that has recognized this nation’s leading “thinkers and doers” since the 18th century.

In addition to sponsoring and producing the general election debates, the CPD also engages in voter education initiatives, provides technical assistance to sponsors of non-presidential debates, and has established an International Debates Network to help other countries that seek to make debates part of their political process.

Additional information is available at www.debates.org.