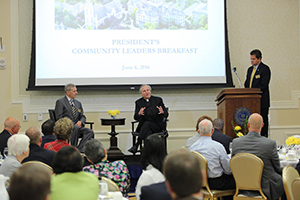 Describing the Michiana region’s recent winning bid in the Indiana Regional Cities Initiative competition as “clearly a team victory,” University of Notre Dame president Rev. John I. Jenkins, C.S.C., told a gathering of 250 community leaders at the President’s Community Leaders Breakfast Monday morning (June 6) at the University’s Morris Inn that it “epitomized our exciting collaborative engagement over the last year.”

According to Father Jenkins, Indiana’s subsequent provision of $42 million in matching funds to support development plans in the Michiana region was only one of the fruits of collaboration between the University and the communities surrounding it.

“Here at Notre Dame, we have been blessed with great successes and exciting new projects,” Father Jenkins said. “Many of these would not have been possible without collaboration from the community, and they benefit not only Notre Dame, but the entire community.”

Construction of the University’s 10 newest buildings has helped spur the regional economy, Father Jenkins said. “It has averaged about $100 million annually over the last five years. That has doubled to over $200 million in the current fiscal year. We anticipate spending nearly $400 million on construction in the coming fiscal year, and another $250 million the year after that.”

Father Jenkins observed that much of the new construction has taken place outside the Notre Dame campus. He mentioned particularly the Turbomachinery Laboratory, which will open Tuesday (June 9) in Ignition Park in the old Studebaker corridor; the second phase of Innovation Park, a new, three-story, 40,000-square-foot facility immediately south of campus, built to accommodate 25 to 30 startup companies; and the new Women’s Varsity Rowing Boathouse on the St. Joseph River. It was also mentioned that planning is underway on the second phase of Eddy Street Commons in the Northeast Neighborhood.

In coming years, Father Jenkins said, Notre Dame will increasingly concern itself with “tech transfer and innovation — finding ways to take the discoveries of our faculty to applications in the marketplace where they will create businesses and jobs. This helps our faculty, who want to bring their ideas to the world, and, I hope, it will help this region build businesses, create jobs and establish a strong economic base essential to any flourishing community. This effort is a priority for Notre Dame, and I hope it is a priority for all of us.”